Might be done for the day. I still don’t know if the sleeve need to go before the circle cape. I think they will. These sleeves will feel nicer on my armpits when they are jersey stretch and not crushed penne...feels a little tight in the armpit right now but I’ve got a bugaboo for that and the pattern was made for stretch fabric so it will probably be okay. I modified the sleeves to be a bit longer and wider at the ends so they gather around the knuckles, this crushed velvet just curls up on itself.

I’ve got the cape cut out, I’m just trying to edit it now to work to sew around the arm seams and then across the top back and middle back.

Great progress Chantel, that velvet is a nightmare. I think it will def be more comfy in the stretch, if not you can always pop a gusset in.
Top

So mistakes were made today, but it is all good because it’s the mockup.

The skirt fabric is the actual fabric I think I’m going to use- the four way stretch. It’s a bit lighter than the one I used on the wrap top, and it has those notes of blue/green you see in some of the brighter shots.

This cape. So like, I started with a McCalls shoulder cape pattern, and then cut the long vertical seams that sit about armpit shoulder level and run down to drape either side of the hand. That went okay. BUT, Butts. Butts need more fabric, especially as this original cut was supposed to drape over the boobs. Who would have thought?

So, you can see these seam lines on either side of me where I’ve inserted a panel to make it sit around my butt better and not be pulling when I move my arms. I think that went okay, but ideally when I get done I want to cannibalise the patterns so I can try to cut it all out of one piece of fabric.

The wrists. Ignore that weird crappy seam about the hand- I was looking at the shot of Padme’s wrists below where it looks like they come up about 5 inches above her knuckles in the back, but down to her knuckles in the front. I tried cutting and it totally did NOT work so I stitched it back on again. *lol*. I am going to have to keep trying to conceptualise what that looks like in 2D. If I can’t figure it out it might not be worth the fight. I feel like it needs to be just a little shorter, but if I cut it wrong it won’t sit right and as it is, it is touching right at that top knuckle as it drapes. If anyone’s brain can think of how that looks let me know because I can’t atm.

So this is just a single layer of the cape, but the real one I am gonna have to double on each side, because of that silver trim. That will add weight. Right now I’ve stitched this around the armpits, and straight across the back which should get covered by the hood. I think I will try to cut the arm seam shoulder bits for the top layer of the back cape, but then once that piece is together use one solid piece for the under back layer. I am hoping to be able to eradicate the seams that are around my hips too just by adjusting the patterning.

This is coming together lovely. Mock ups really help with getting all the details right.
Top

So I finally got out of a rut and did something. I bought a silver 1/8” trim, but it was a bit metallic, and I think I wanted a satin finish on the trim. So I got some presser feet for my machine and went to town making my own trim. GUYS. Having the right foot for the job is like night and day. How did I ever sew trim on things before in my youth?

Again using the trim foot I did a stitching demo and I think we will all probably be on team satin trim. At least I feel it looks closer to screen accurate.

Behold! Think the fatter one wins hands down.

Had to try a bit in the actual fabric.

After testing out the triple stitch as well as the lightning stitch, I decided I liked the triple better as it maintains stretch on the jersey, but also does not show and stitches when pulled tight.

I’ll go back finishing the mock up after this, but my brain needed to do something in real fabric to feel like I was making any progress

Its always good to do those little trials to see how it looks....sometime's its that extra bit of effort that makes the difference.

On the subject of feet......So much so, its worth investing with each project.....Especially for super tricky things.

Just as a note for people not used to sewing, usually if you look on the manufacturers website for your sewing machine its lists the feet and what they do. If you note down the category number and the foot you can usually find a generic version on ebay for a lot less.
Top

Yep. I am finding that using a stretch needle with the ball point, the correct stitch, as well as decent thread and my walking foot on top (left over from quilting days) has been really helpful sewing the jersey. Not pulling one fabric more than the other and it keeps the stretch in the seams.

I’m getting some stretch fusible interfacing today in the mail that I might use on the arm joints or anywhere that is weight bearing. We’ll see. I’ll need something to hoist up that skirt.

Going to hand tack down the ruffles on the shirt piece on my dress form so they sit just how I want them to- that’s just the first sewn part and now it needs to be refined. Should be able to do it without showing and thread by tacking down the under side of the ruffle if that makes sense.

Great advice on the sewing with stretch.

I think elastic panels or the stuff the use in hold up tights and bras could work?
Top

So I have this week off and I have planned nothing other than costume, so we’ll see how far we get.

Decided to make stamps today- so I took part of the back of her outfit and imported it into procreate, then drew in a new layer over top.

I sized a few of these to see what looked about right once I printed it out.

So then I took the back of the first mock and chose the size I thought was about okay. I printed a front and a reverse one as it looked like all her patterns use two stamps in various angles.

So yeah. Made stamps with two layers of craft foam and some cardboard, tried doing some silver acrylic on a swatch of the fabric which looks okay, but I need to get fabric paint and test that out too.

So I kept going and reworked my sleeves to be a little less tight at the hand and in the arms. I hate tight sleeves

. Happily, this gave it a bit more of a natural sit on my knuckles that allows for some freedom of hand movement. Think I’m happy with that. 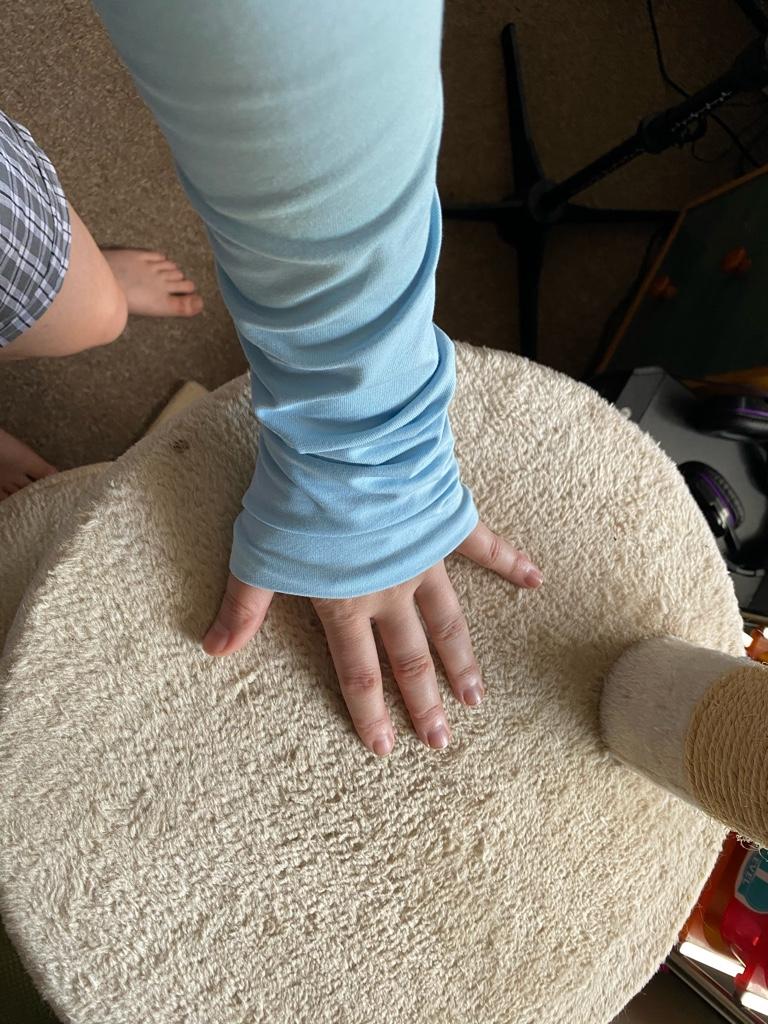 I also went ahead and did the base for the undershirt. Learned we will for sure need to double layer the skirt, at least as far as a slip will go as it gets a bit sheet for my taste when the back fabric is stretched out. 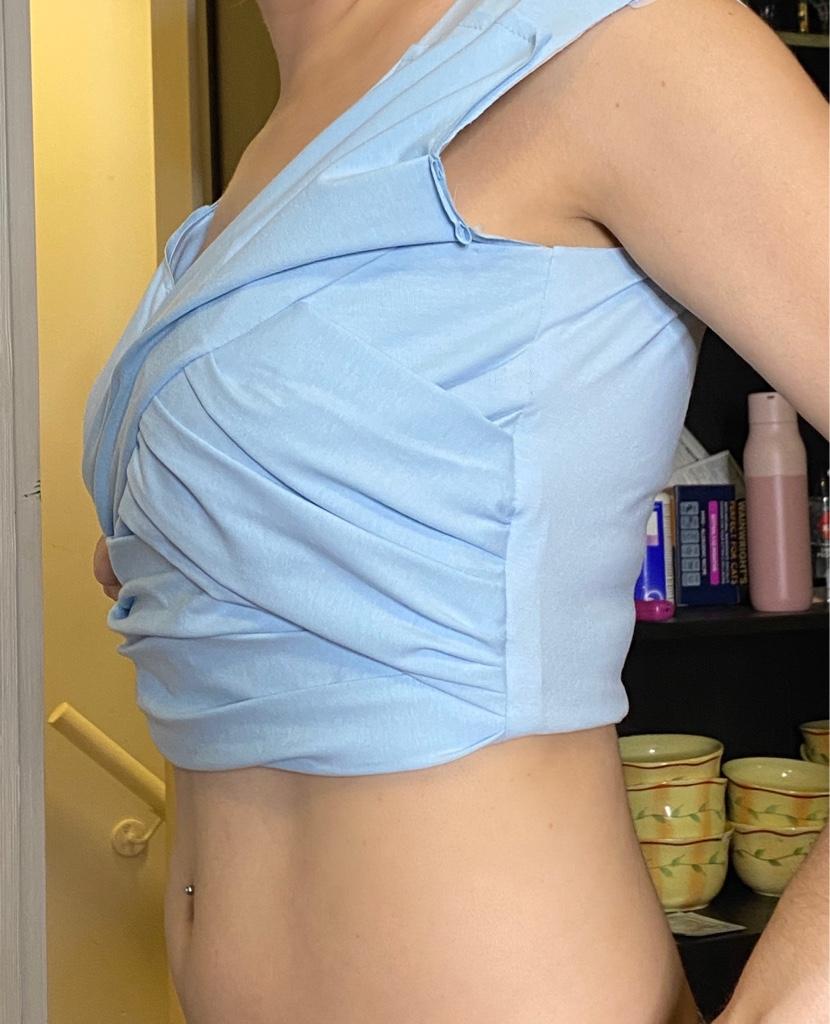 Yeah, the back is a bit sheer and fat rolls my bra, but that part won’t show with the cape bit.

And one more, just to show how horrible my husband is at taking pictures...he managed to shoot downwards, get his thumb in the frame AND get me with eyes closed. Talent.

So hopefully we can get the sleeves on tomorrow and hem the top, add the bra closures to the top, and then start the engineering for the over layers and hood with mock up material. 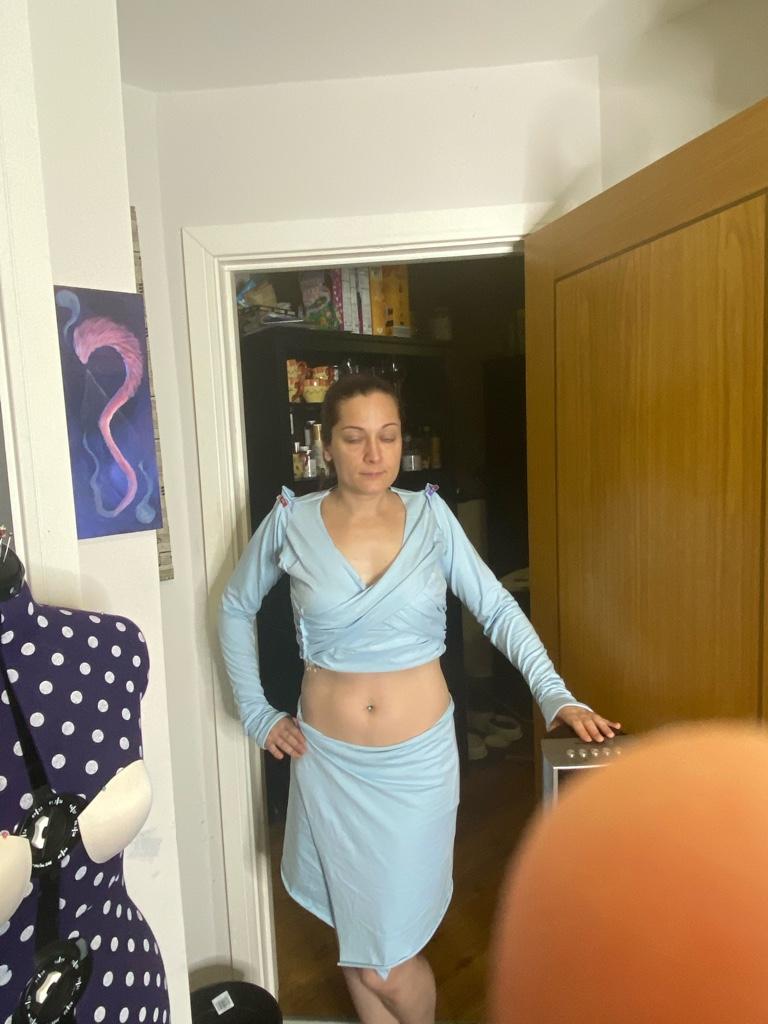 So I got most of the cape done, but none of it is attached today. There are two seams- one meets about armpit boob level and the other on the back side of the shoulder. So I did those. 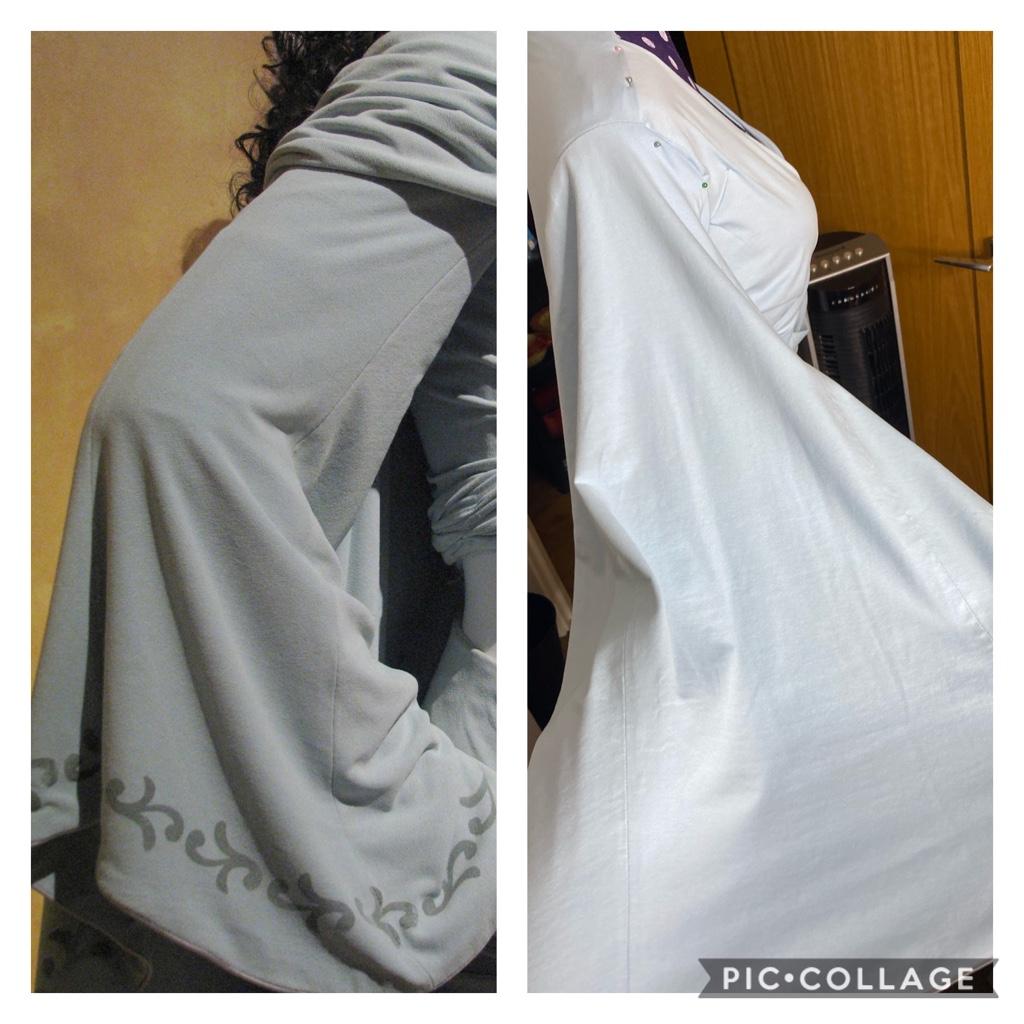 Then came the trim struggle. I tried every combination of things- problem was that because I can’t use the walking foot the top fabric goes a bit slower and I would end up with extra fabric and un matched seams.

So I tried using a fusible interface, which did fix it perfectly, but also made the little hem too rigid. Then I tried a stretch fusible interface, which didn’t work when the stretch grain was in the direction I was sewing, but did help when the stretch was opposed to the direction I was sewing. So I edged both layers THE WHOLE WAY AROUND with it and put on the 1/4” trim foot. 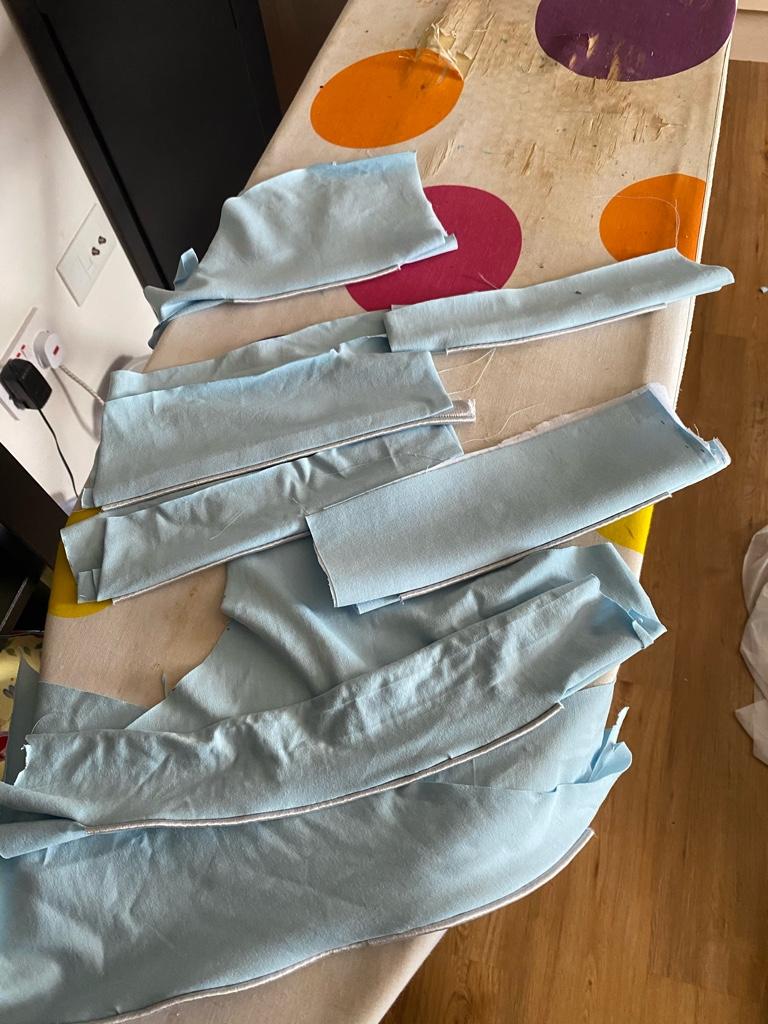 I may be making mountains out of mole hills, and I haven’t tried stretching or ironing them out, but occasionally on the underside of the fabric there is a little pucker. Not sure how to fix it, and I had to use that sewing foot to get the damn thing right to the edge. It’s almost 10 meters around and hand sewing wasn’t a really good option 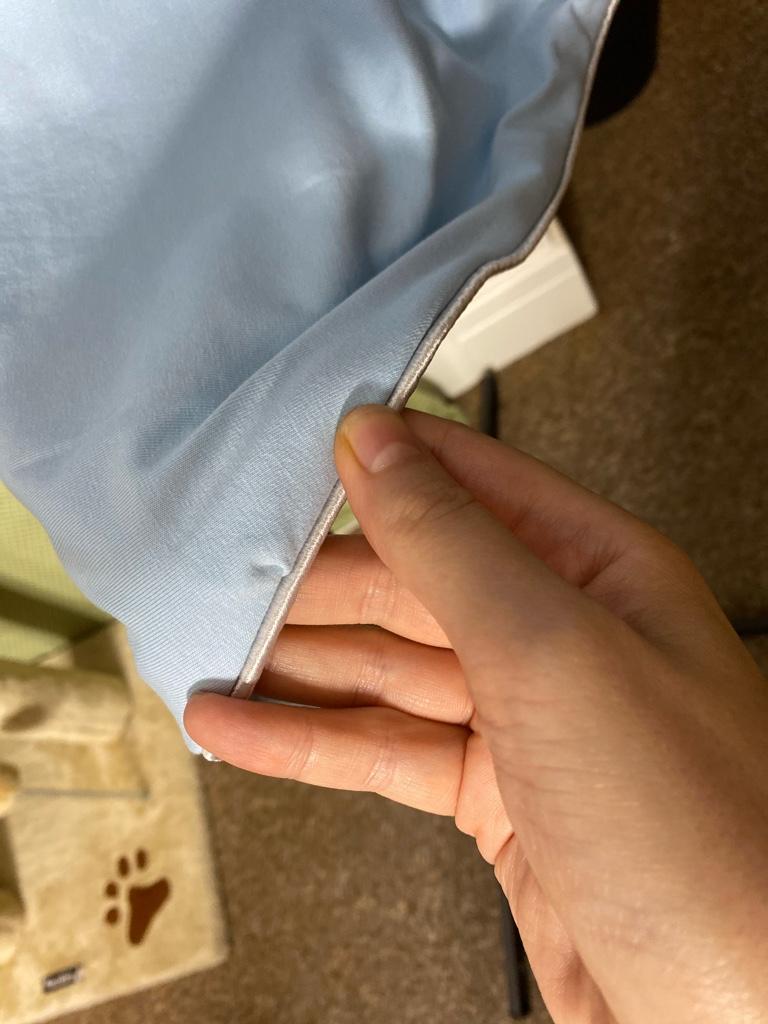 It isn’t attached yet and I haven’t ironed the underside yet. I just don’t know about it. I can attach tomorrow or try stamping first. 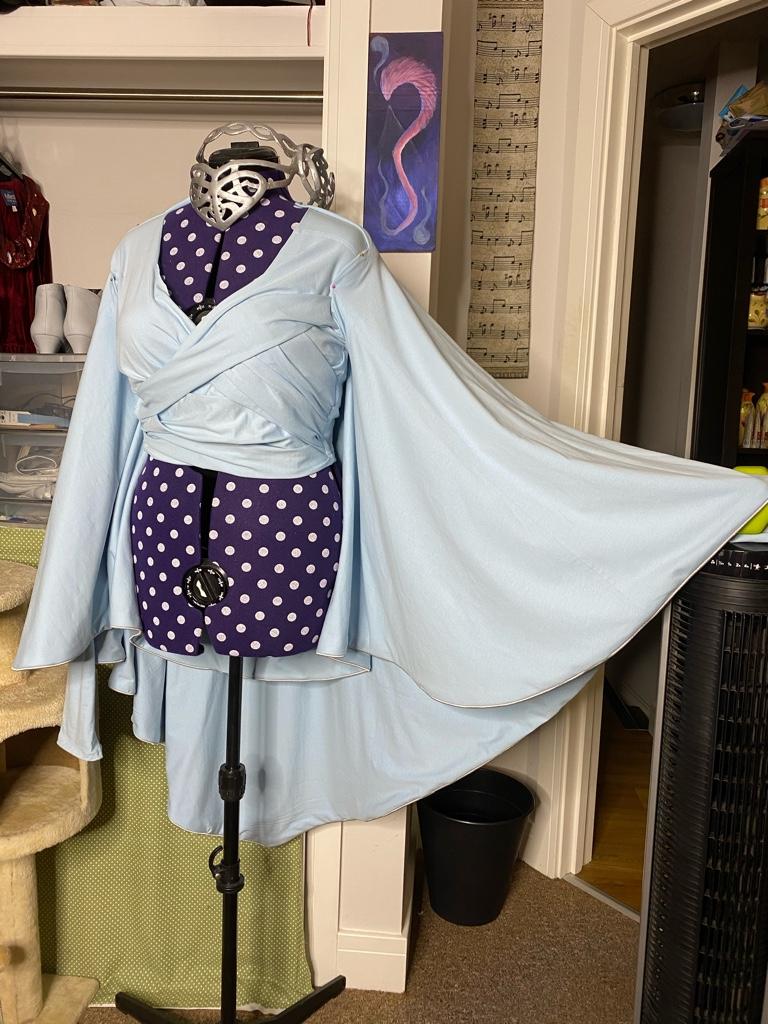 
If I struggle even if I'm using the right foot, stabilizer and the non stretch has been cut on the bias to help with matching the stretch.......I would look to hand sew. But honestly a few tiny puckers on the underside wont kill anyone if you can live with it. I can poke Kat to see if she has any ideas, more so the info is there than anything else.
Top
Post Reply
89 posts