So I decided to upgrade and do a different version of the Crait trooper. It is generic one again and a mix of troopers seen on screen and in the visual dictionary. I recently purchased an old sewing machine and decided to learn how to sew, so I thought I would have a go and I made the Poncho. The Poncho is made out of an old Soviet 'plash palatka' Cape/tarp. The hat is a Soviet 1980s Afganistan era hat, and the Goggles are of unknown origin but are a match for one's used on screen. The boots are po zu as I used in my original Crait varient, as are the trousers. 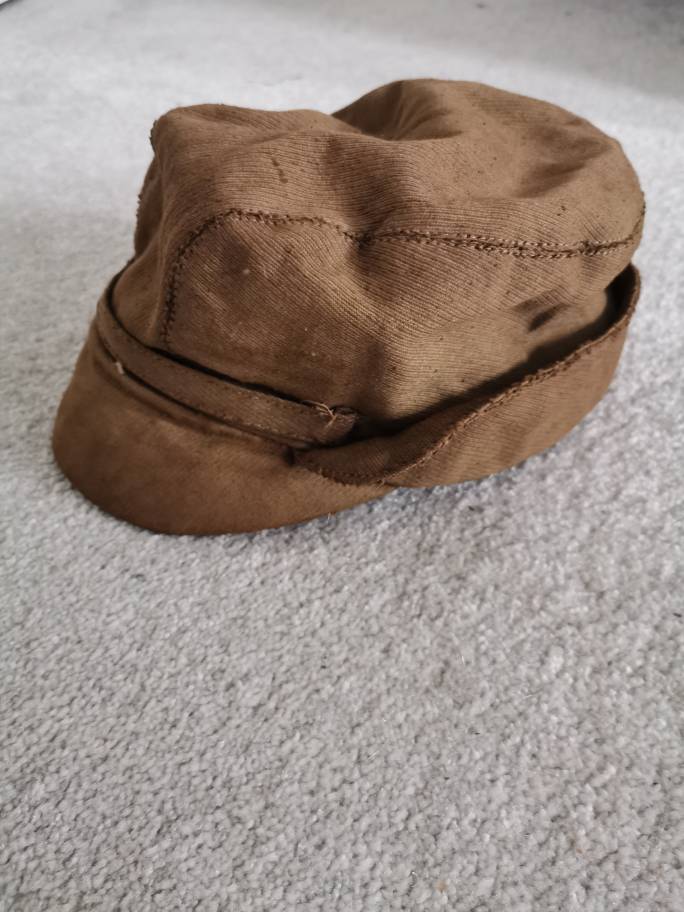 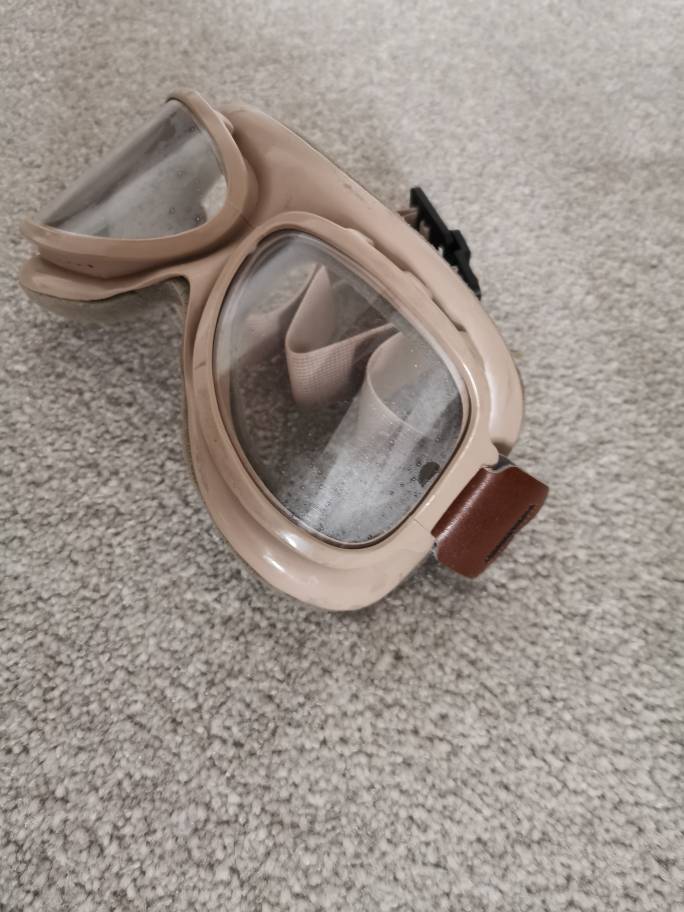 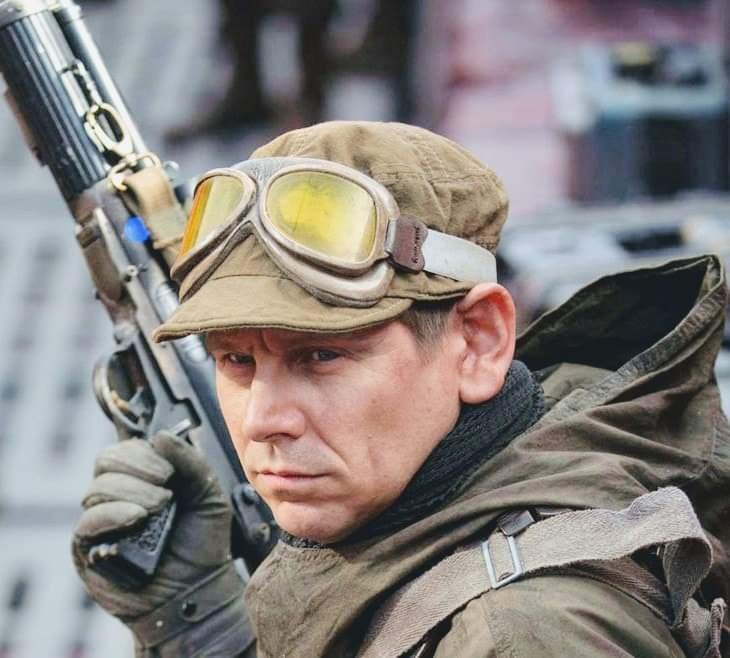 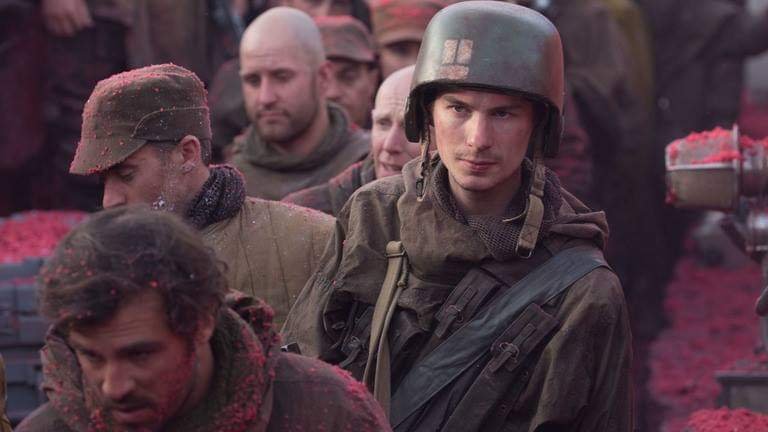 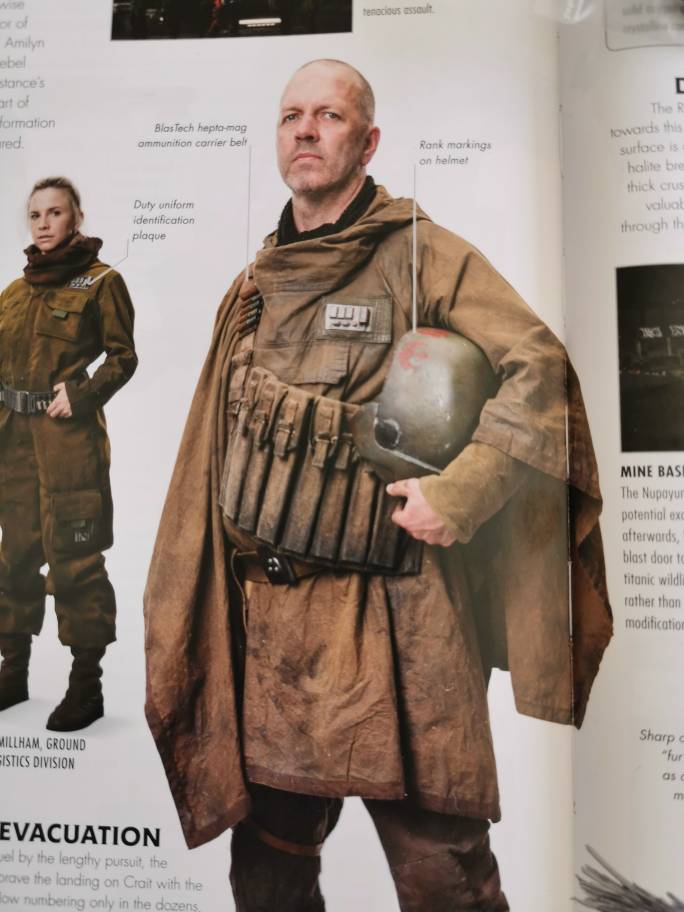 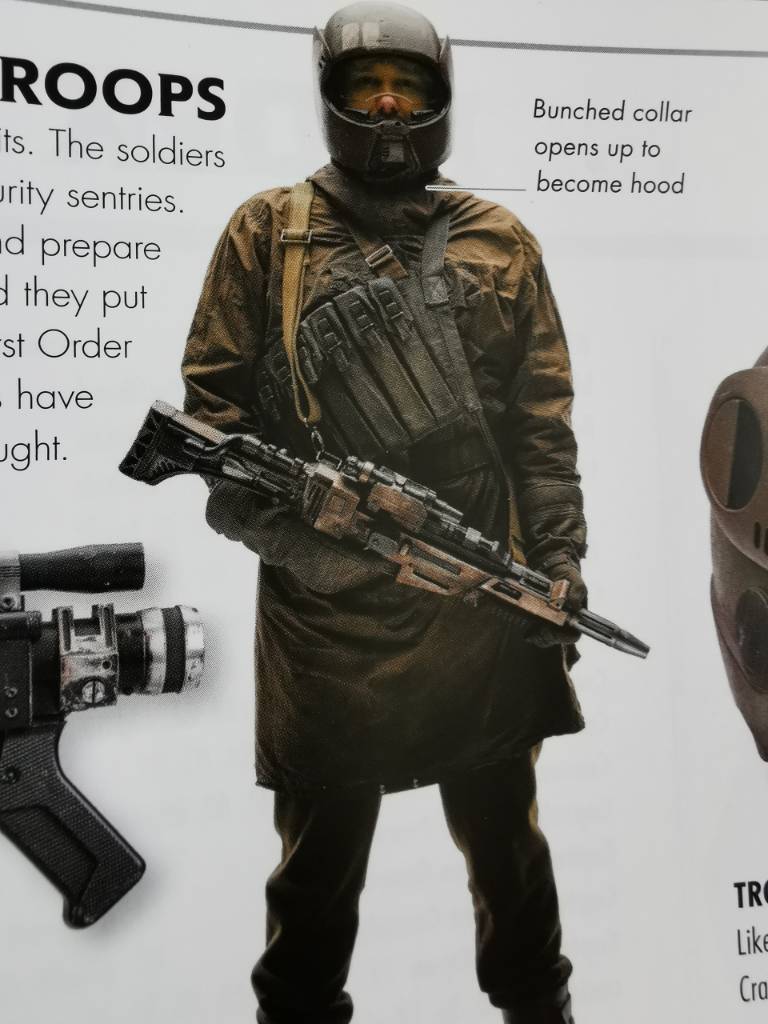 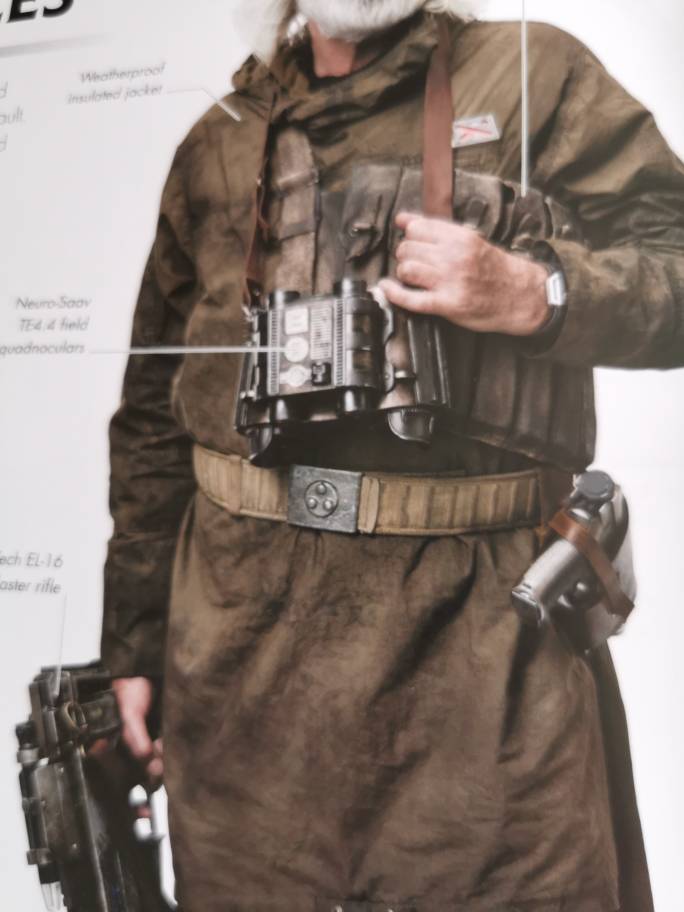 This is an interesting one. There are a few people doing the pilots with these goggles now as well. I've seen the goggles pics about and they look right in the frame but have you a reference for a clear and not yellow lens?
Starts to get a bit mix and match from there. Can't see clearly if the cap, mesh scarf and goggles guy has a poncho or not as the other pic is the skater boi helmet and poncho.
The reference pic with the cap and goggles looks more like a typical forage cap, though the other pic shows that cap you have but no goggles. He's got an interesting vertically stitched coat too. I wonder if picking up a forage cap might give you another option with a proven cap and goggle pic, or a cap and no goggle option. The refs support their existence but not together on one person, if you get what I mean.
With respect to the poncho, the ref to me looks more khaki/brown than olive/green and longer in the leg, further down the thigh toward the knee especially on the front. Does it look short on you compared to the reference?
The last two pics appear to be a kind of long, sleeved smock and not a poncho. Apart from the hood they look reasonable to knock up if they can't be sourced. The second one is a high rank officer with a holstered Glie.
This is pushing into new territory, the pieces do appear to be those used but there may be a case of they're not used together in the same kit. A single reference pic would be great to show all the options used together but as it is none of us could predict how a judge would see a kit with components drawn from multiple references and put together. You might well be OK with that cap and goggles though as it's not too far a stretch to consider them being used together like that.
The poncho is what I'd be most wary of there. To me it looks shorter and greener than the references.
Happiness is a warm A280. Or A300. Even a Glie-44 at a pinch.
Top

So, as normal I like to go off the beaten track and do things people haven't done before..... So, there is a pic in the book with goggles on the hat with turned up edge at the sides and back, I've taken a photo, also there are goggles that don't look yellow to me but it's not that clear, see screen grab.
There are loads in the trench and all appear different, with different shades of khaki. I will take more photos tomorrow in natural light as it does look greener in the photos than natural light, it Is made from an old Soviet tarp that is a browny green khaki... I agree it is shorter than the one Sgt Salty Sharp has, but I was going for generic not a specific charecter. In the past with the Scarif trooper it was an option to use a mixture of items to make a generic trooper, I assumed it would be the same for Crait. Maybe I take some photos In natural light to get a better colour and see what happens. 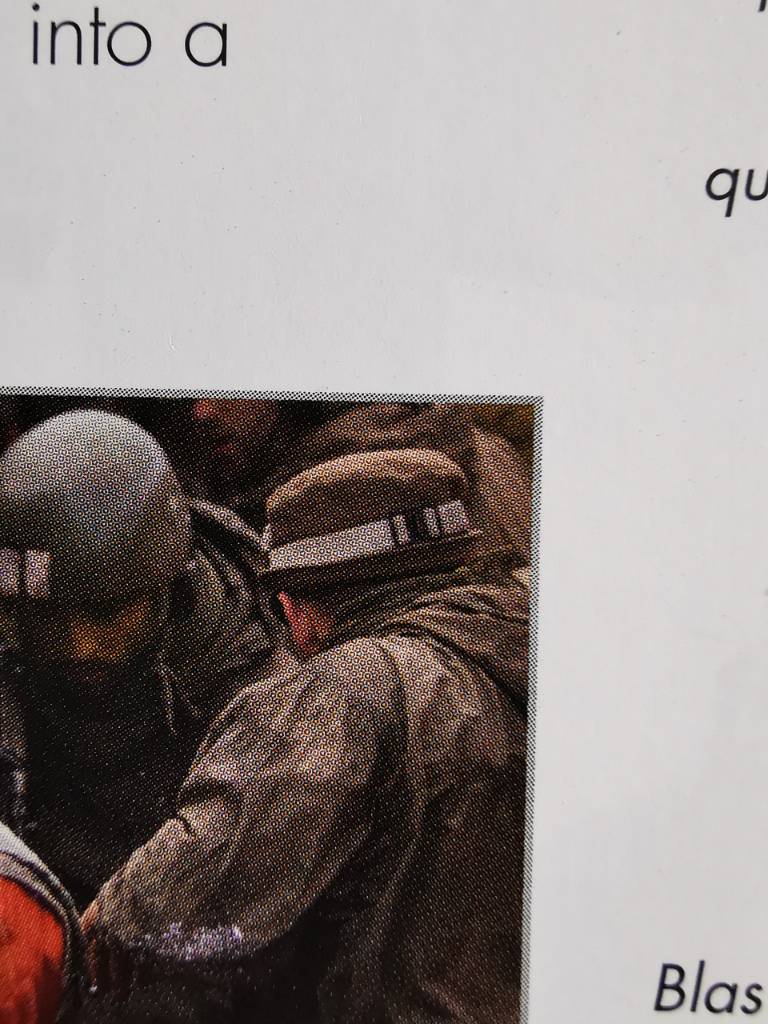 Mix and match would be common but sometimes it's a case of if you have this component then you can't have that one but you have to have the other instead. Sticking with refs is going to be the strongest hand to play there. It's possible there could be leeway but not certain without something to back it up.

Thought this may be useful Phil. Apparently this is from unused TLJ footage. Chap on the left has a poncho which seems a bit shorter than the Salty guy from the book. His poncho ends just above the crotch, although still a bit lower than yours.

See also he has his ammo pouches slung a lot higher, and his belt fastened much higher up than yours.

Maybe raise your ammo pouch rig and belt so you're wearing them much higher, and see how it compares to the guy in the pic. If there's any room to pull your poncho a tiny bit further down that could also help to get it a bit closer to this reference.

I notice this guy also has the gloves, which matches the configuration you've chosen here as well, which could be a useful reference for you. Obviously there's a few other differences between this and what you've put together, but could be a useful template to show the judges?
"Go, and pray that I find your master before he finds you."

Thanks you for this, that's great.

Phil, I would echo what Geoff said , that it's basically proving the references, not just in isolation.......I think that pic that Alex found might have done it for you, but you never know how the judges will be.

The discussion thread on the main forum that you participated in does seem a little, shall we say, stalled. The original proposal was somewhat vague.

I think the poncho is indeed an acceptable option but we have thoughts on colour and length. I feel it looks 2-3 inches short, compared to Alex's pic which is probably the best match for what you aim for. The colour in that image also might help you as it's closer but I still feel you're looking a bit green for the given poncho refs.

You could of course submit as is and test the water with it. I'd be inclined to suggest a couple of accuracy enhancements by getting the poncho a bit longer and maybe a bit more washed out as that's the element that raises the biggest questions to me. That rear shot could help showing the goggles on what might be the Russian cap due to the folded up hem..
Happiness is a warm A280. Or A300. Even a Glie-44 at a pinch.
Top

It's less green in natural light, than the inside shots with flash, camera white balance and lighting can affect the colour, the photo of the Poncho in the book looks less green than in the film when he licks the salt. I'm going to test the water with the judges and see what happens....ill send a link to all the references I have gathered.

Just received this email, and It's been added as a varient to the previous version on the link.