So anyone that may have seen this over o the main RL forum will be familiar with my recently completed ANH Han build. It was approved at the end of April and I couldn't be more thrilled with the result. Thought I'd throw this post up here for any UK Han cosplayers that want to use it for reference etc. It'll essentially be a copy and paste of my other thread but with a few minor updates, including more photos.
---------
As ever, I wanted to make an entire set of ANH Han soft parts. When I first started cosplaying about a year ago I ran up a (really poorly made) vest just to see if I could sew anything and that's really what kicked off my cosplay journey. Flash forward a year later and I decided I was finally going to legitimise my ANH costume by remaking the vest and the trousers.

Up until that point for the few photos I'd taken in ANH I'd used my bad vest and a pair of denim chinos with ironed on blood stripes.

I'd made a flannel ANH shirt that I was (and still am) really proud of - the pattern is pretty dead on and it's ridiculously comfortable, so that was really the only part of my 'original' attempt that I really liked so I kept it relatively unaltered. The only change I made was to give it a darker tea dye in order to better match the yellow brown tint of the original.

The first upgrades for me were a new pair of trousers. To do this I slightly reworked the pattern I'd originally developed for my ESB build. This basically involved heightening the rise, dropping the crotch slightly, and adding more room in the seat - my original ESB trousers are pretty weirdly fitted because they were my first attempt.

I used a really nice dark-mid blue stretch denim for added comfort and I'm really thrilled with the selection. The blood stripes were purchased from someone I know on Instagram who had a spare set - I don't know where he got them from originally unfortunately.

To begin with I obviously started by cutting out my pattern pieces. I didn't redraft my patterns, I just made my adjustments directly onto the fabric by enlarging certain parts as I marked them on with chalk.

I always begin trousers by sewing and top-stitching the riding seam - I'm lucky enough to have an overlocker now so I can keep the insides looking neat and professional.

I'm proud to say these are probably the best thing I think I've ever sewn and the jump in quality from my ESB trousers to these is enormous. 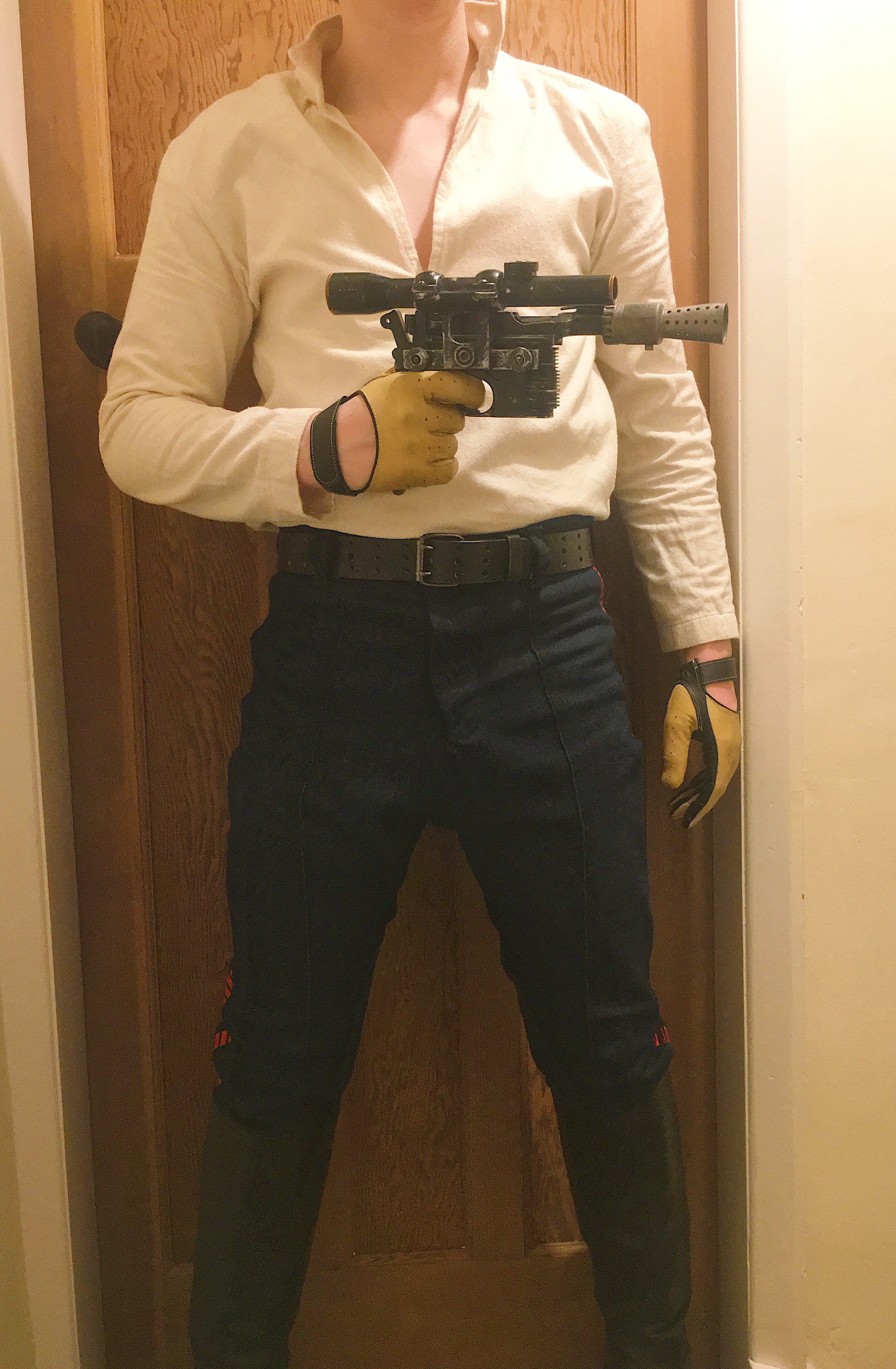 After that I quickly began work on my new vest! My first attempt was a little long in the body and really badly made because I'd never sewn anything before so I knew that when I did this one I wanted to nail that cropped, slim look of the original. I feel that I perhaps went a little *too* short in the back with mine, but looking at some images it seems to match the original - I believe there were two different lengths of vest used for the movie and I always preferred the cropped look seen here! 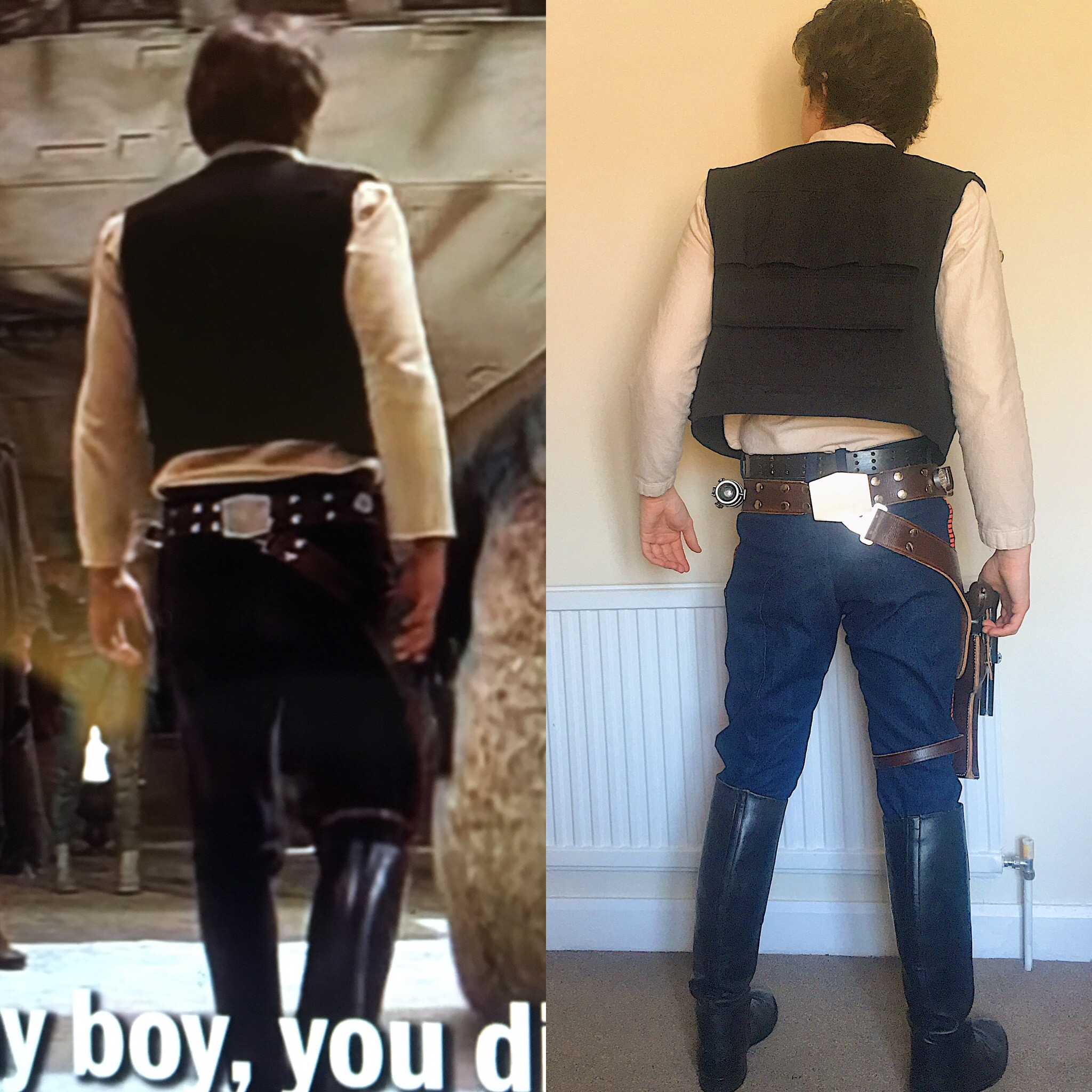 I began by drafting my own pattern - this is entirely scratch made as I used the body pieces from the Dawn Anderson Falcon Jacket - just heavily cropped, but I scratch drafted everything else. Each pocket was loosely based on measurements available online, but slightly shrunk down to better fit my smaller frame. 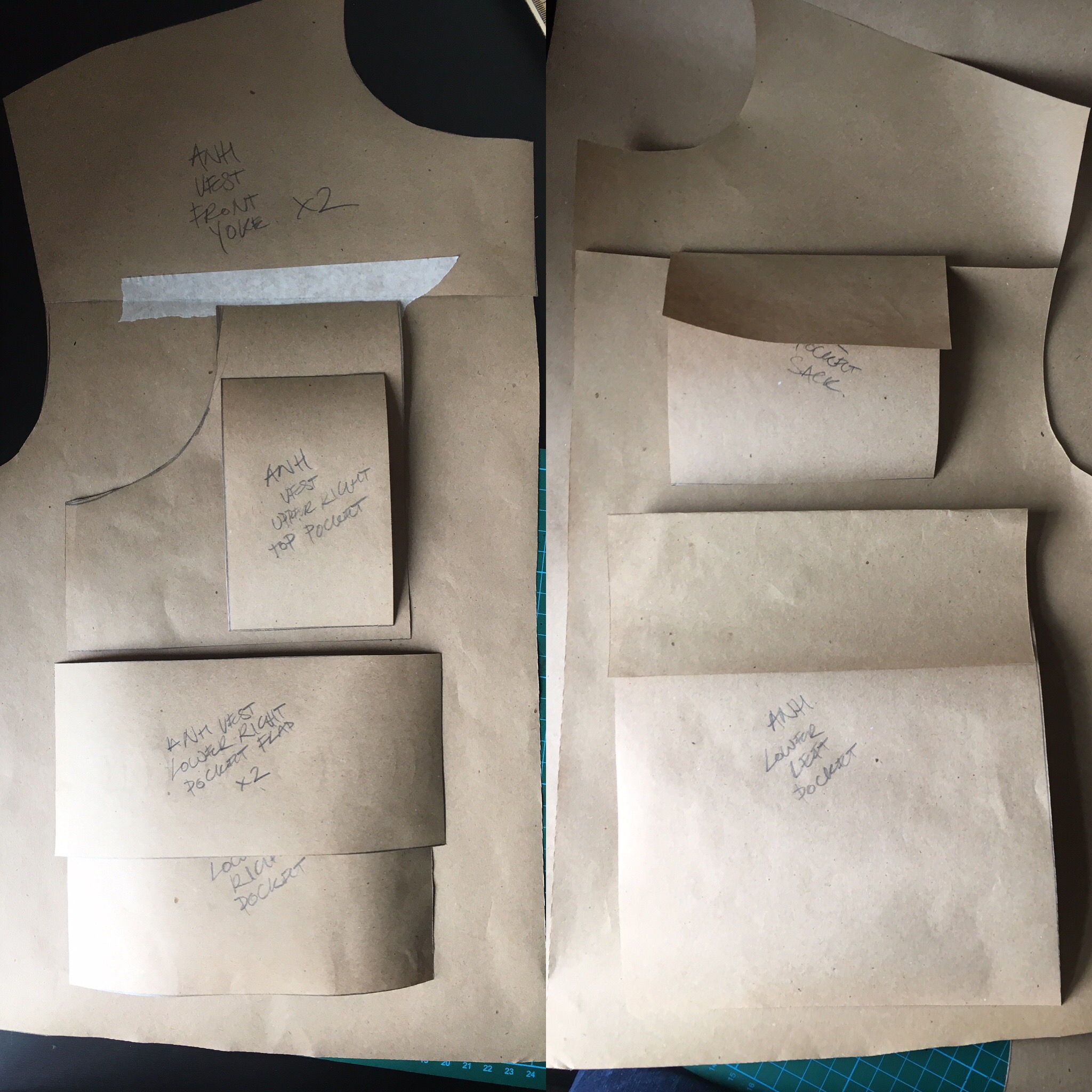 I ordered a generous amount of heavy black cotton twill, and after a quick wash and dry to remove any and all shrink from the material, I was good to go!

In one fell swoop I managed to make all my pockets and assemble one side of the vest. My one complaint is that the top left pocket of the vest isnt as far over to the armhole as the original, so I know to watch out for this next time. 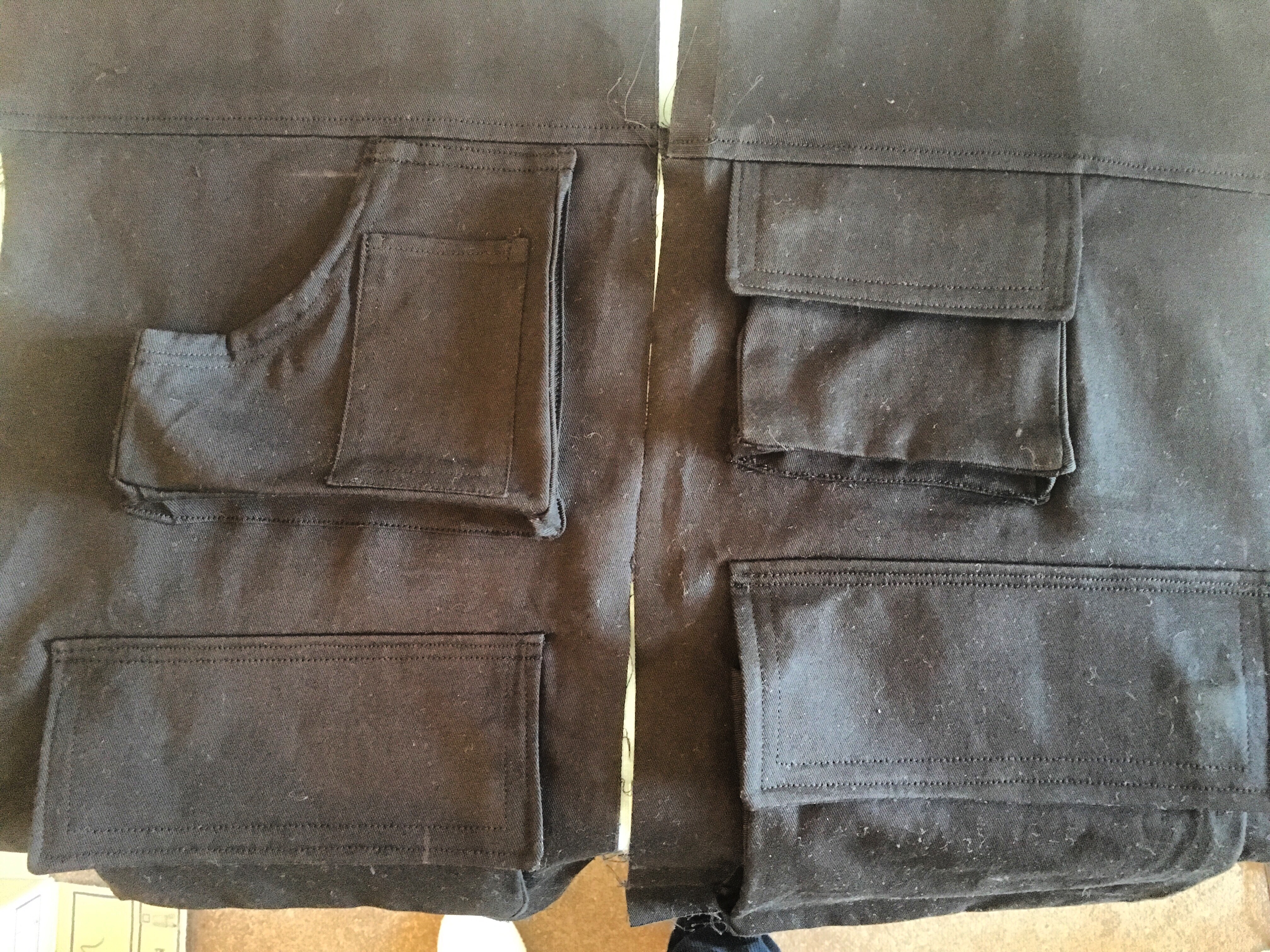 Essentially I just methodically worked my way through, adding pockets to the front one by one, and then moved onto the back. 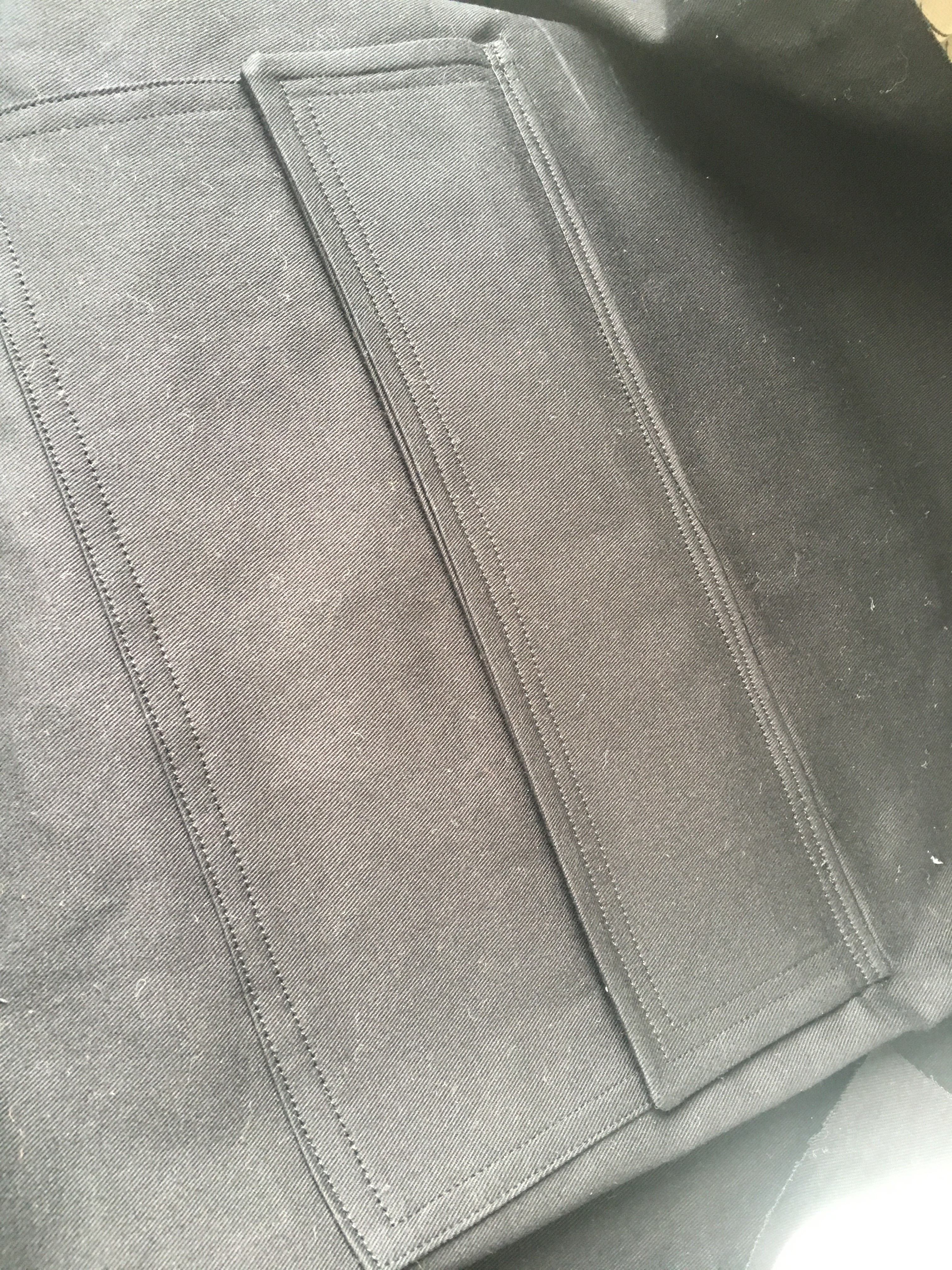 The back is pretty standard as we all know, one large pocket right beneath four loops - To do the loops I used one long strip of fabric, sewing it down at each edge and at three equal intervals. I'm thrilled with how neat the back looks! 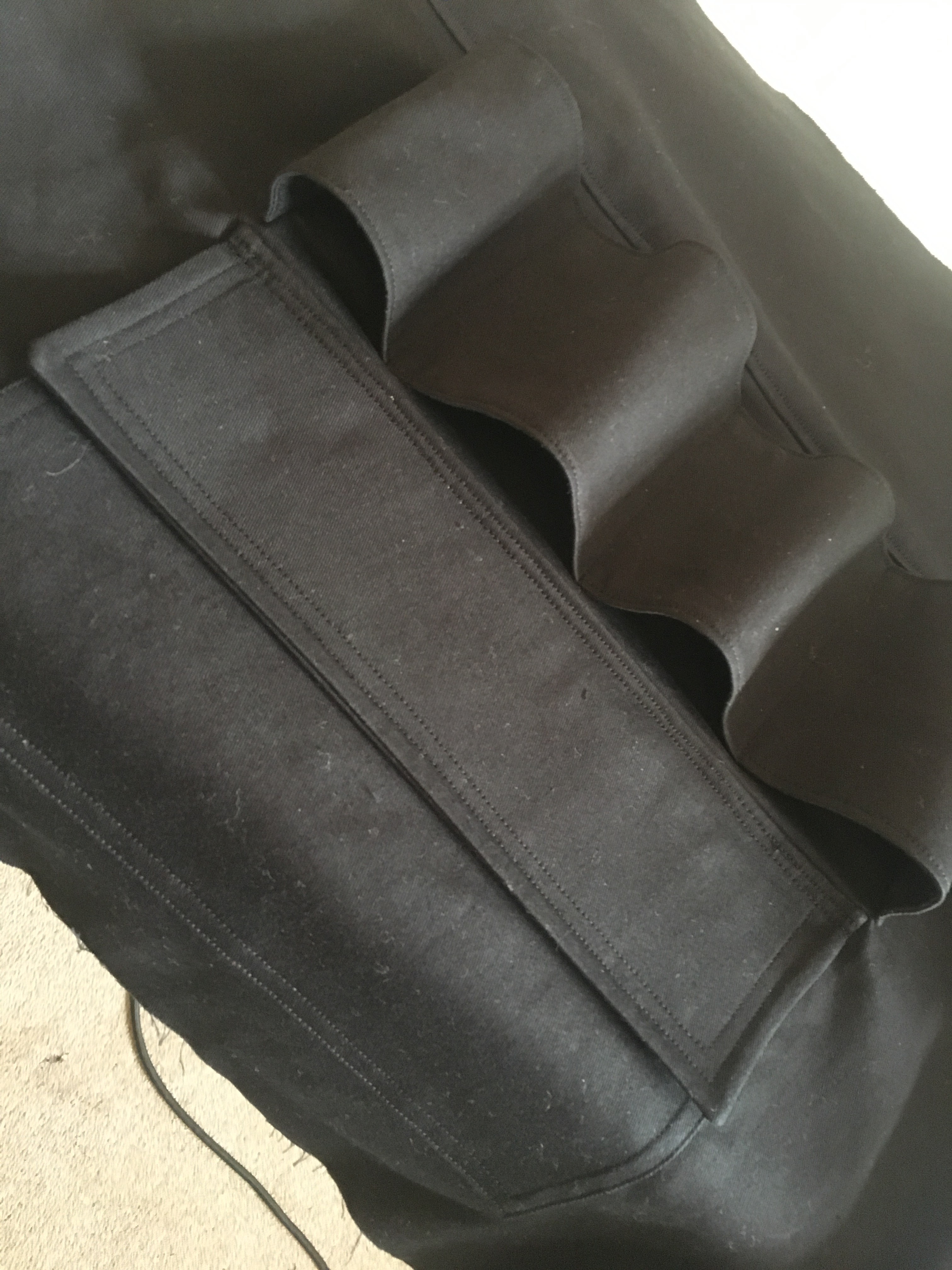 After that all that was left to do was to sew the sides and shoulders together, add the lining (I do this by making the lining as I would the vest, pinning it to the vest with the lining on the outside, sewing up each front and along the neckhole and flipping them then the right way round. I think top stitch to keep everything in place. This creates a really nice, neat neck hole) and add the waistband.

Now with all the soft parts done, I quickly snapped some pictures for Insta and I have to say I'm really pleased with the fit of this costume! I'm pictured here with my ESB Todd's rig that was just a stand in until I snagged a second hand ANH Todd's which you can see a little further down.

The blaster is a DoopyDoos ANH V2 and I love this piece! The cast was clean and solid and the detail on it is stunning. 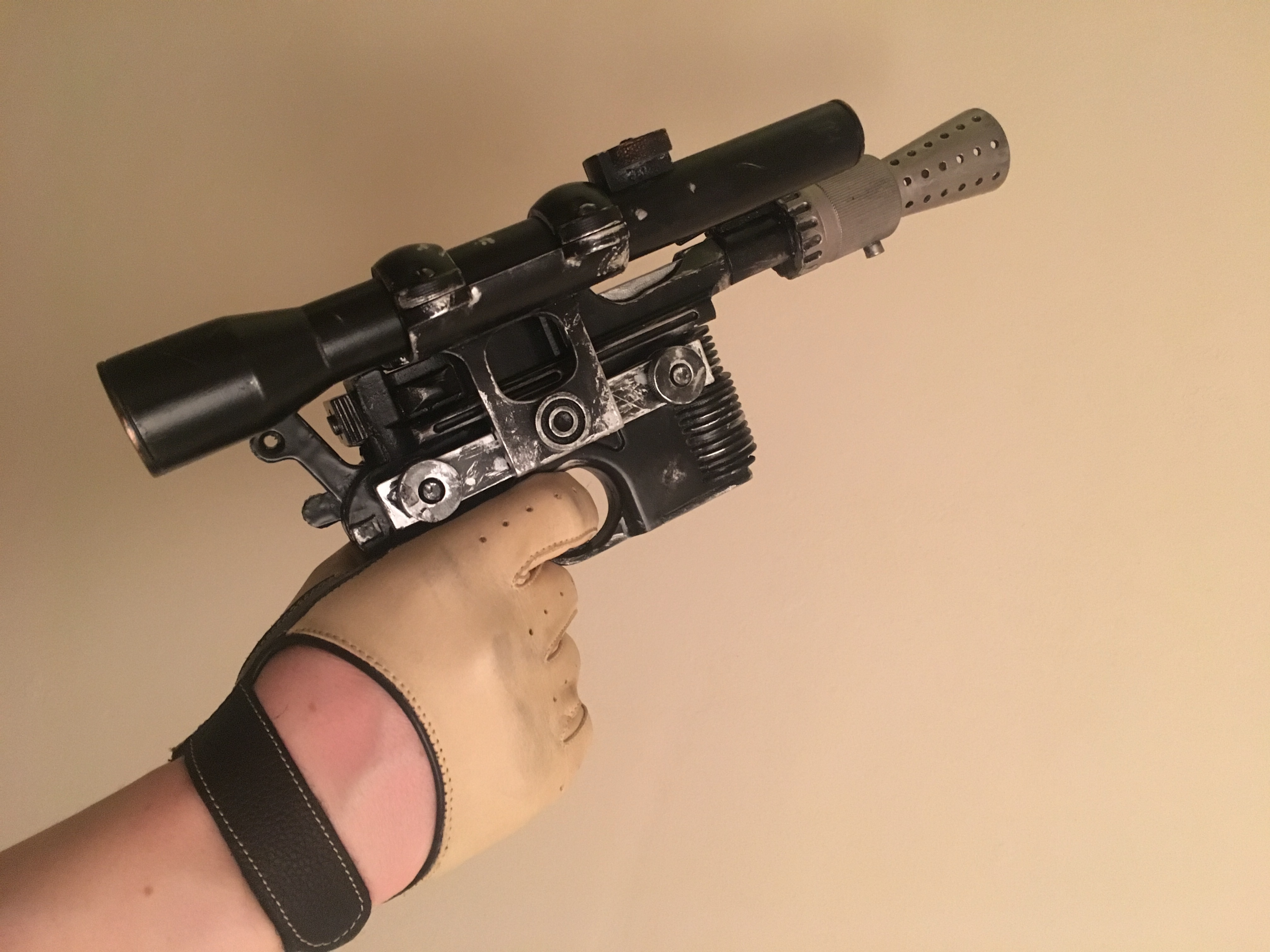 The boots are a second hand pair of riding boots that a VERY well worn - they're a little more trashed than Han's boots but I love the look, and most importantly they fit my calves loose enought to slouch down.

The gloves and trousers belt are both Magnoli. I darkened the gloves with a little oil to give them the more yellowy appearance we see in A New Hope. 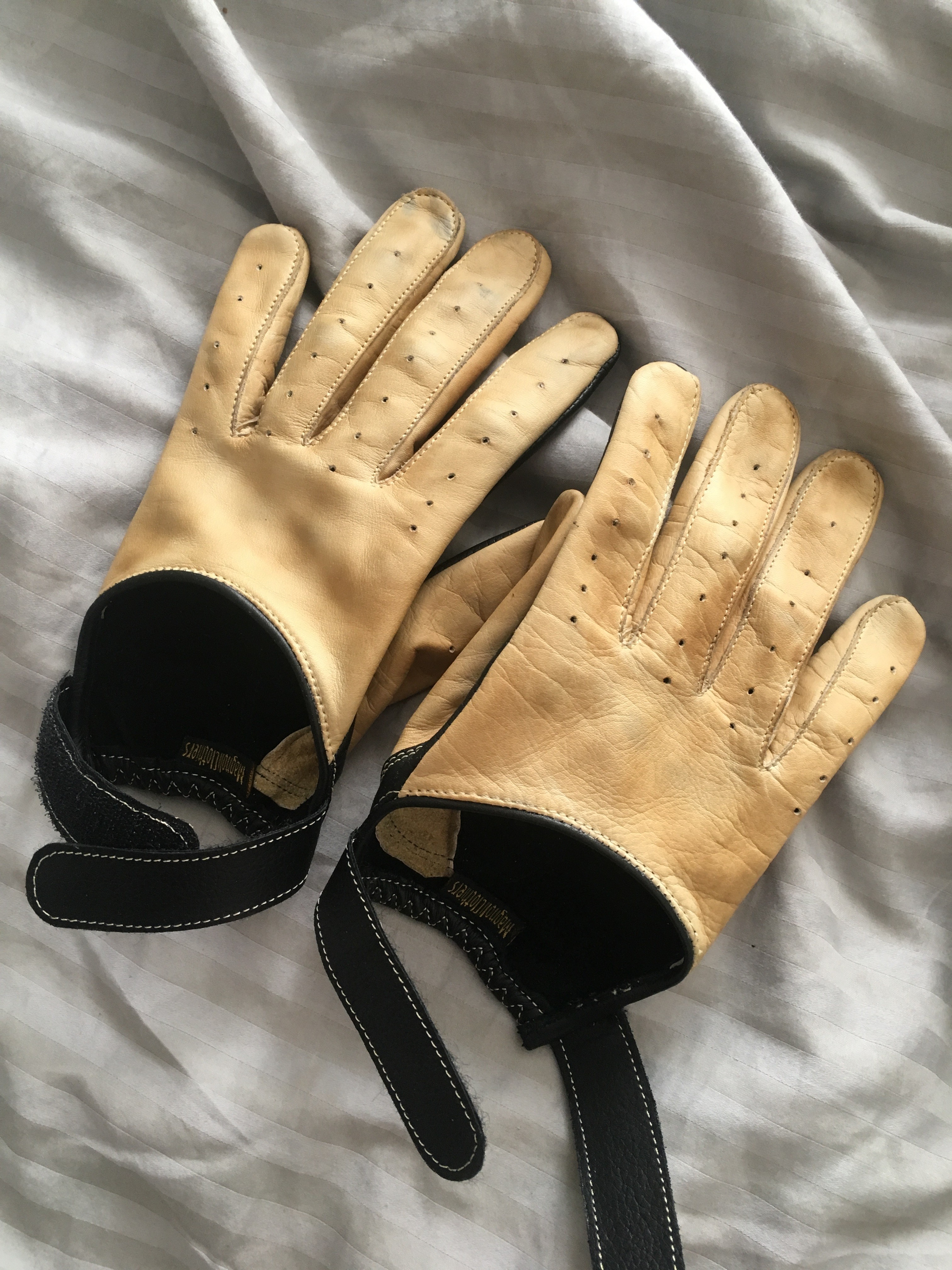 After this the only upgrades left were my new gun rig with period accurate belt tools - this is a second hand Todd's that the original owner had modified to be smaller so I had to undo these when it arrived. 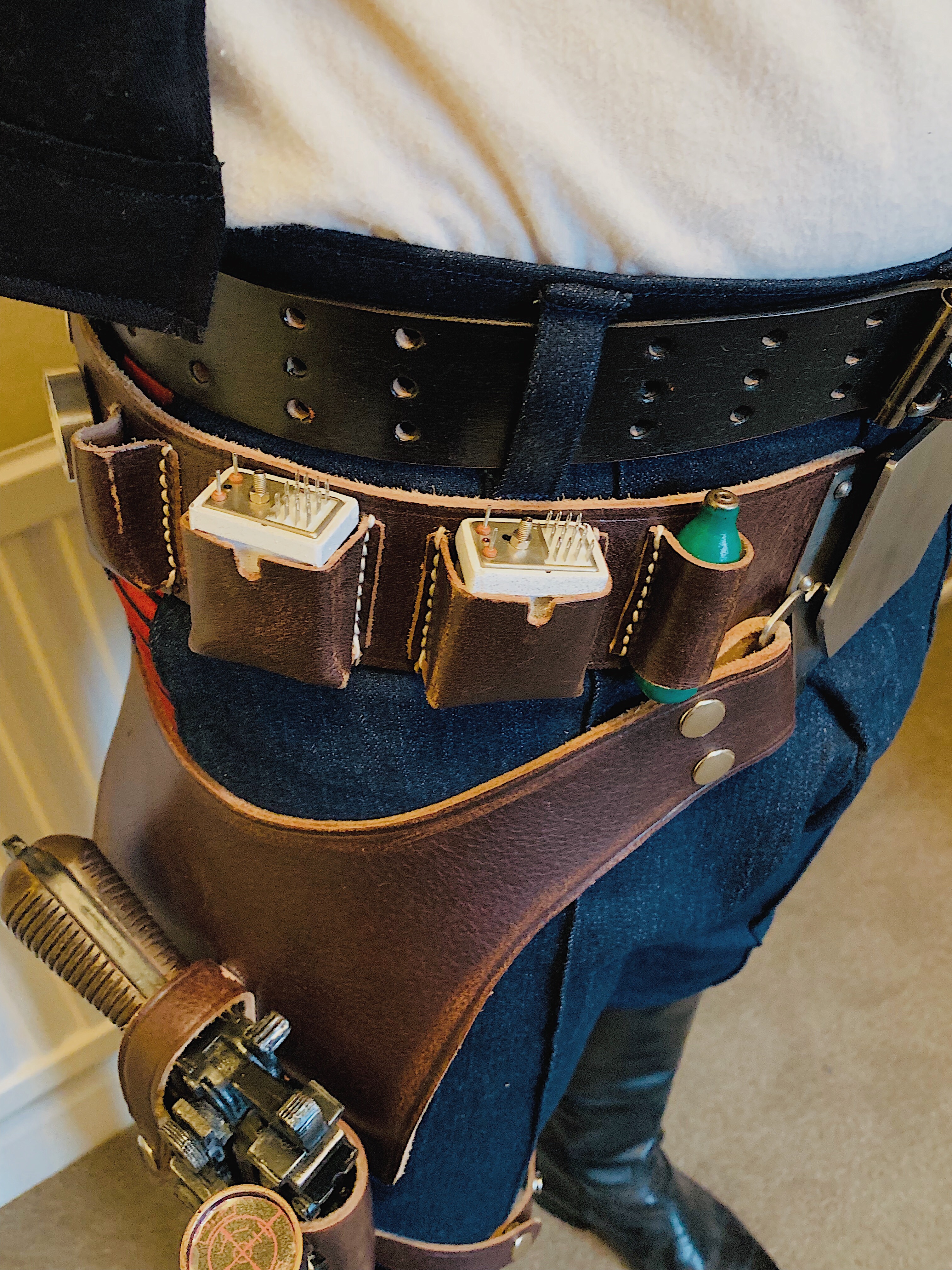 Additionally I did the aforementioned tea dye on my shirt - the repetitive soaking, washing, drying made the flannel pill slightly which I really like as it lends the costume an even more well worn look. On top of this I went back and altered the armholes as I wasn't happy with how far over my shoulders they went. Much happier with the balance overall now. 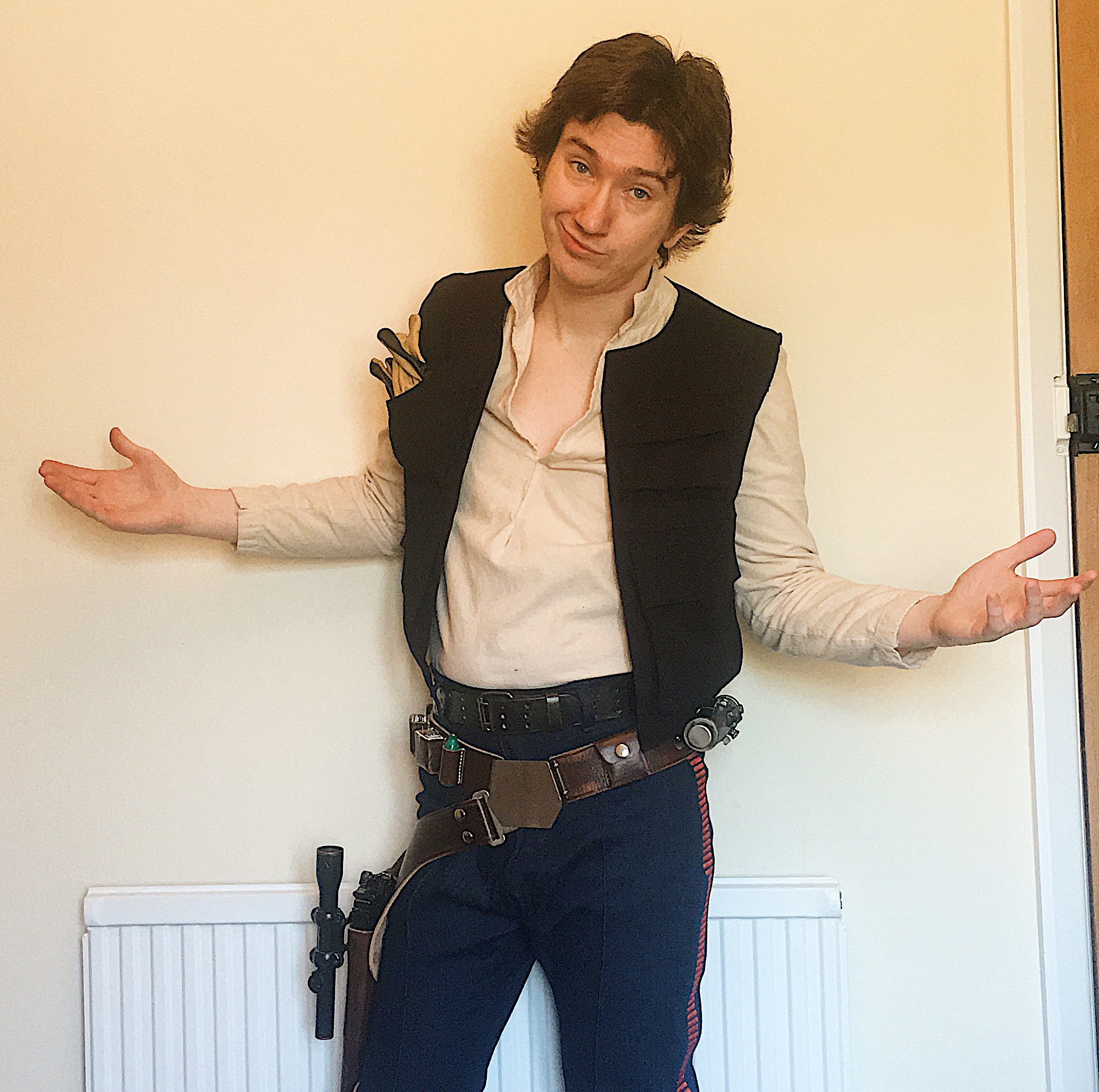 The final (and less important part of the build) was my newly completed DoopyDoos Greedo Killer. Obviously this is harder to troop with as it doesn't fit in the holster but I've always loved this prop - I'll probably use it for the photoshoot I have planned when I finally set up my etsy. 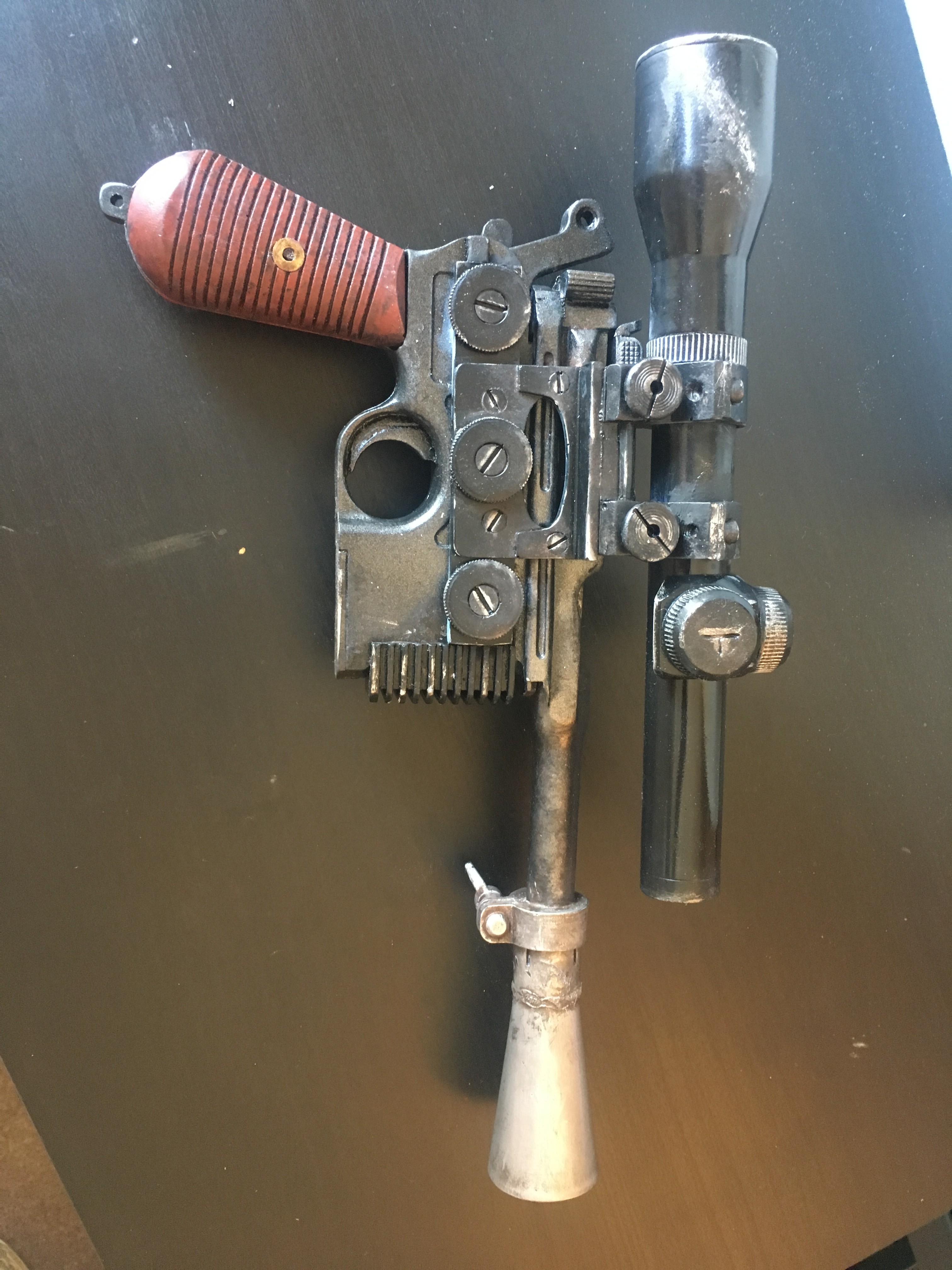 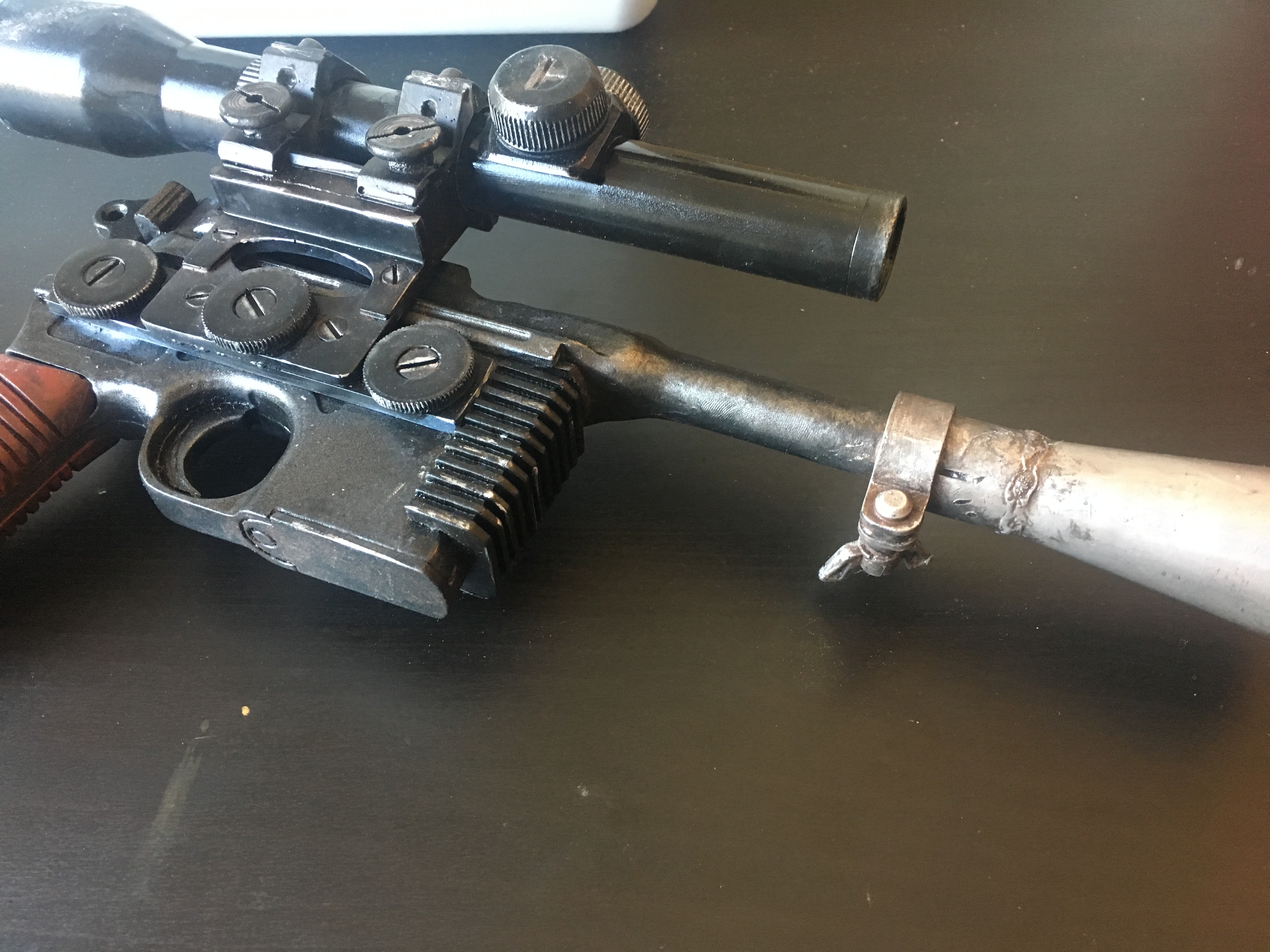 That's this costume complete (at least for the time being) and with the approval I'm now eagerly awaiting some much needed time off work so I can finally wear it out to a troop! 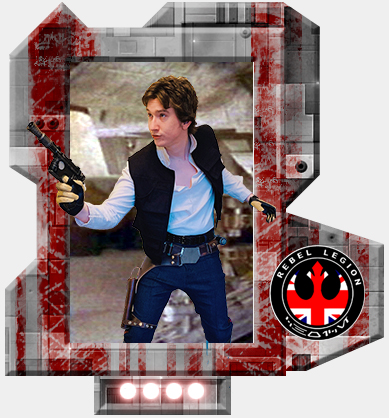 Sorry for the essay and pic spam but I hope this helps anyone doing their own ANH Han build! I'm no expert in any of this but if anyone has any questions I'm more than happy to try to help!
Top

We love a detail WIP, any build info that helps others is always appreciated. :)
Top

We love a detail WIP, any build info that helps others is always appreciated. :)

Thanks so much! I loved putting this together and appreciate all the folks in the community that helped me when I first started cosplaying so always love the opportunity to pay it forward

Sent from my SM-N960F using Tapatalk

Sent from my SM-N960F using Tapatalk