Here you can showcase your large props, scenery or even droid builds!

For Star Wars Celebration Europe 1, hosted in London's Excel in July 2007 a full 1:1 scale Tantive IV corridor set was recreated so that visitors could take part in a re-enactment of the famous opening of A New Hope. Members of Elstree Base and the visiting Rebel Legion members took part in the enactments which were filmed.


After convention the Corridor was members of the base were able to rescue a section of the Tantive IV Corridor Wall from being skipped. The door section and part of the wall was first shipped to the Museum of moving Image on the South Bank and then ended up at the Ritz Cinema in Lincoln. We managed to snag a section for ourseves.

The Wall itself is constructed of wood, whilst the white inserts are made of a white or black ABS plastic.
There are four “frames” that the ABS panels attach to and then a top and bottom curvature attach on to those frames before being lifted into place.
The four frames are then secured to one another and then secured to the two columns.

We use a piece of vinyl flooring for events that don’t have a grey colored floor.
This is securely taped to the so not to cause a trip hazard. (This will run the length of the wall when not overlapped with a width depth of 75cm)
The Wall has both sound and lighting features, that are built into the wall to give added realism.
The sound scape is run of cd with two speakers built into the columns of the wall.
The soundscape recreates onboard ship “rumble”, with an optional battle track that plays once ever 15minutes.

Set-up
With the exception of the two large columns the wall is completely modular and can be broken down into components for transportation.
The minimum requirement of crew members for set-up\take down is two members with cordless screwdrivers.
The set-up\Take down time: 30minutes-1hour, depending on how far we need to carry everything from the van.
Currently the Van required is a long wheelbase van like a Sprinter, this is due to the length the columns and frames are.


Upkeep
The Wall is kindly currently being stored by Chis Moxey (DragonHawkz) in the south east near Guildford.
As the wall is in essence white it does need to be periodically refreshed and paint dates are added as a troop diary for those wishing to helpout.
Upkeep and transportation of the Wall is covered by the RLUK Supporters Fund.
We encourage the use of the Wall at any and all events that can house it, the only cavet is that for conventions the organisers will need to cover van hire and fuel.

In an attempt to make the Wall easier to store and transport we have embarked on some modifcations to the original wall.
The first part of these is almost complete and has been undertaken by Paul Andrews (Andrews Boy) who has been working in his own at his workshop to split the existing columns and create a thirds column.
This will aesthetically make the wall look like a complete section and the splitting of the column

This is a real coup. We’ve got to make good use of this with a movie realistic photoshoot.

Jerrick Sunrunner wrote:Yeah defo!
We're hoping to have it at MCM Birmingham but theres always scope for it to be taken further a field if needed

That’s awesome. It will add so much. I’m sure it’ll make everyone’s day

This is very awesome! If It migrates at some point, I would be willing to transport it to Scotland for a Con or two. :-)
Top

And I'd be happy to help out with that! There was a Death Star interior wall at MCM Glasgow last year - it made a great focal point for us and the ISS; we raised almost £2,000 in charity donations from photo opps alone. This more detailed prop would be awesome!
"Judge me by my size do not." - Master Yoda
Top

Ooh Scottish Rebel road trip, I'm up for that :)
Top

Krayt55 wrote:Ooh Scottish Rebel road trip, I'm up for that :)

I remember the wall - got into a bit of trouble there from memory: 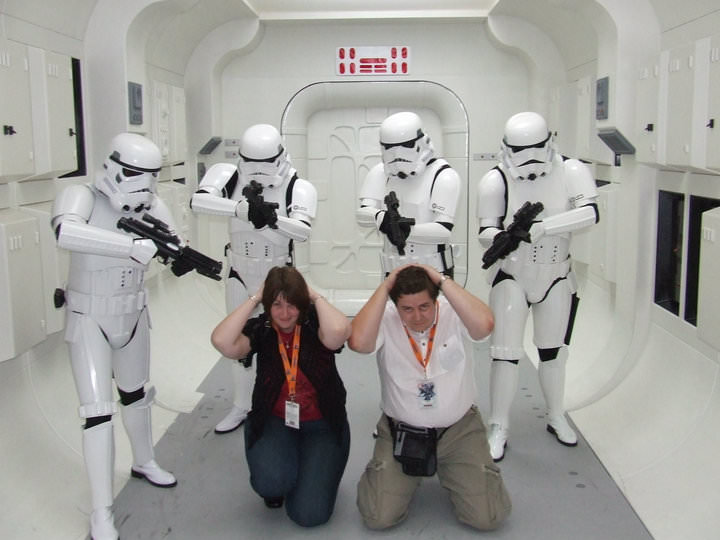 Krayt55 wrote:Ooh Scottish Rebel road trip, I'm up for that :)

I'm sure that could be arranged!

Cana O'rel wrote:I remember the wall - got into a bit of trouble there from memory:

I’m collecting the Tantive Pillars from Paul Andrews this coming weekend, he’s done a fantastic job with not only halving the two existing pillars but creating a third.
On top of that the Paul has kindly painted them and filled in some imperfections.

The Tantive will be taken to NSC Space Centre at the end of June and after that we will be looking to spend a day giving it the once over before Invasion Colchester in September.

Next up we’ll be looking at upgrading the black panel backs and cutting the 4 frames in half to allow for ease of transport and storage.
Elstree Base Commanding Officer (BCO)
1138th Krayt Squadron Co
London & South East Events Coordinator
Rebel Legion Pilot Costume Judge
Top

Thanks for the hard work guys :)
Top
Post Reply
22 posts