WIPs without activity for over 12 months are stored here
Please post up or message one of the Base team to move threads back to active!

This is a tentative WIP for Hera's post-RotJ look seen in the epilogue of the last episode of Rebels. It's around 4-5 years after the liberation of Ryloth, and I reckon a few months to a year after Endor.

I wasn't sure if I was going to do this in its entirety as, to be honest, i hate this look on screen. When I first watch the finale I started angry crying I hated it so much. However, I did say to myself that I would make all of Hera's S4 looks and Vanessa Marshall said that she loved it at the LFL finale Q&A. So: obligation to give it a whirl. 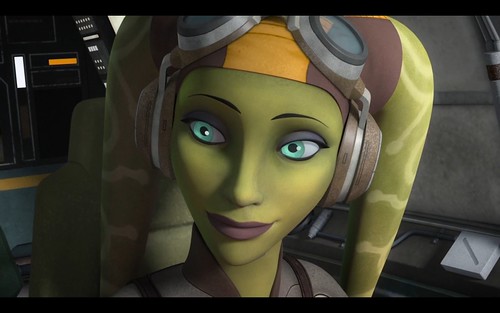 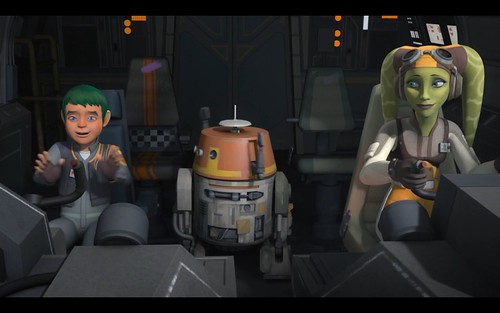 So anyway, Tracy is off trying to rustle up some turnarounds for us so hopefully they're be incoming soon. Per what we can see it is the exact same flightsuit, gloves and vest. The webbing is possible white now? But that may be lighting. The greeblie on the vest now has a few new details - i have a couple of spare casts that I can paint up.

The shirt is the same pattern as the S3-4 shirt, it just now the outer two central panels and collar are a darker colour. The headgear is the same but with a darker ring around the rim of the goggles, and a couple of tiny engraved details on the headphones (though i'm not wondering if I just missed them in every other shot....)

The cap is the same pattern as her hero cap - this has basically been exactly the same since day one. I wanted to remake my hero cap with some revisions, so this was a perfect opportunity to test drive that. 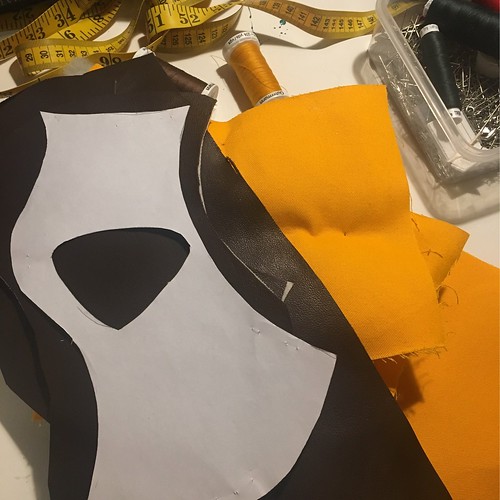 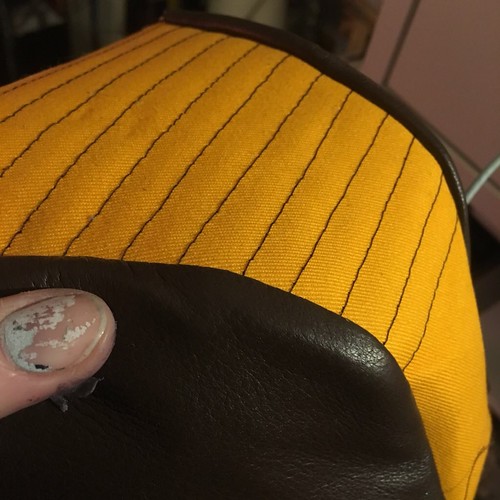 The yellow is some leftover flightsuit cotton twill, the brown is left over lamb nappa. The construction is essentially the same: Quilted central panels (the yellow - bonded to calico for some extra rigidity as this is normaly leather) and the rest is backed with, but not bonded to calico. 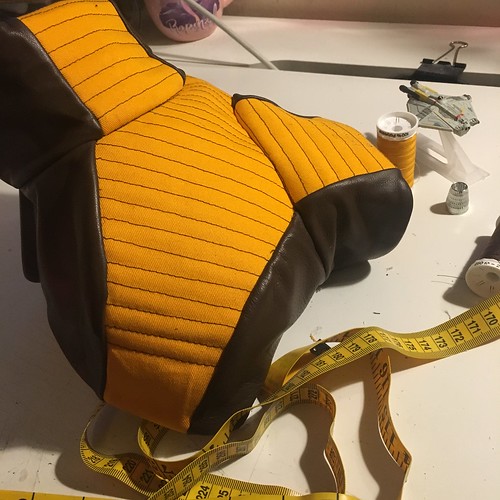 The ears are different - I've never been entirely happy with my ears as they were messy and have been growing increasingly deformed as they just weren't stabilised enough - I made them by cutting the shape intot he base and then inserting an encased piece of foam. Meh. They also didn't have the right protrusion because of this approach. Also they were rounded rectangles, whereas closer looking (though it seems change constantly!) it's more of a triangular shape. Which makes sense because ear cones. So this time I took two pieces of 5mm foam, glued them together and cut them to shape, embedded a magnet for the headgear. This was then just placed on the surface of the base (little dab of pritt stick just to stop it sliding as i worked) and then leather was stretched and pinned over it, then top stitched in place and trimmed down. It looks pretty great, tbh. Much neater. On this cap as it was an experiment it's not quite perfect - they need to a bit taller, a bit smaller, sitting higher. But sitll: pleased.

the whole cap was lined in the same yellow cotton. 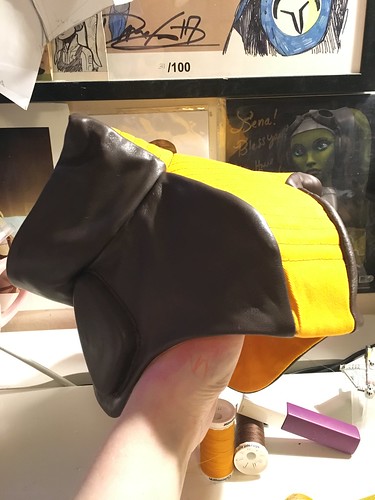 At this point the cap is essentially just an object to have. So next was a make-up test to see if this look could possibly ever look ok and if a full look would be worth considering: 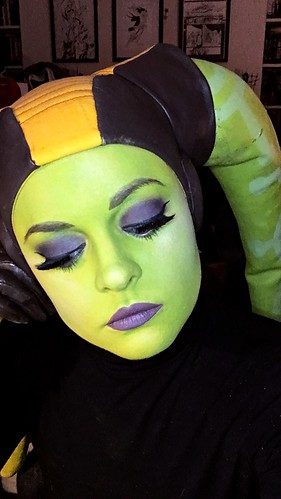 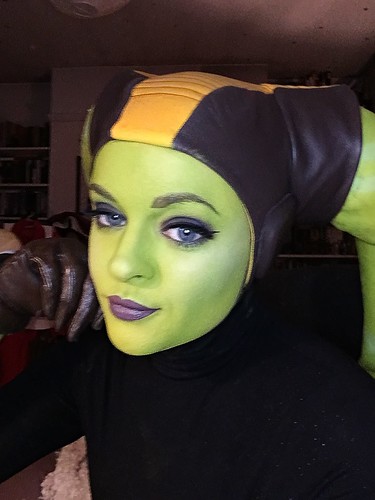 Holy what, it looked AMAZING. Which makes zero sense and I'm a little offended by ho good it looked. I used my basic Hera make-up overall, then for the eyes kept layering up purples and blues until i got the right density and colour. The lips - i had picked up a few different lipsticks but none of them were right, so I ended up using a grey-purple lip suede and then dabbing on more of an electric violet eyeshadow over the top. Nailed it.

I tried to do my best Proud Space Mum but all I got was Dramatic Space Widow. But I think that's ok. this is probably going to be one that's going to just simmer away int he background and get done as and when I feel like it,, as Bo Katan is next on my roster and I really am keen to get her done.
Top

Tracy kindly shared the turnaround for this look - and also the first turnaround we’ve had of hera’s hero costume. 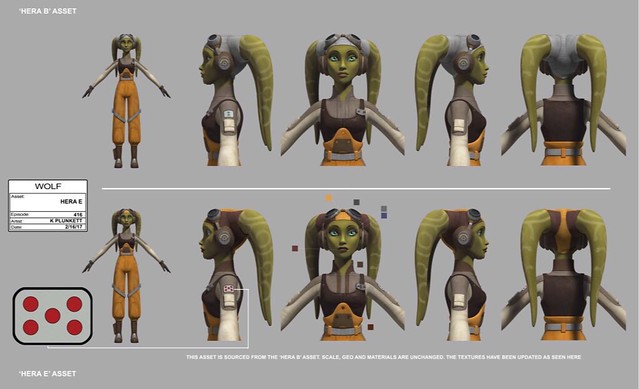 I ripped up a commission that fell through to make a new flightsuit - the flightsuit are basically exactly the same except for colour details on the waistband. Unfortunately those are things that can’t be easily swapped out so: new flightsuit. (Also my original is a bit tired, so a new one is good anyway.) The person it was originally made for had a fairly different body shape to me so it was a bit of magic recutting it to fit me. 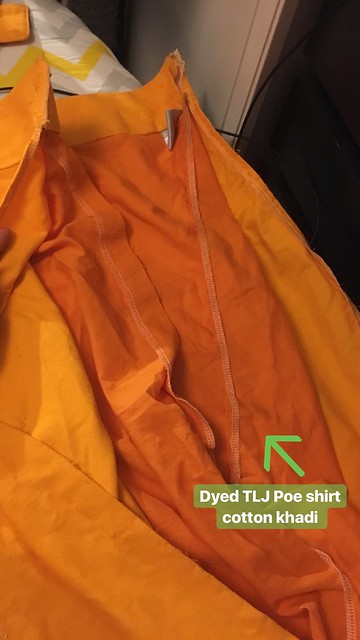 The shirt is exactly the same as her s3-4 shirt (it’s almost like they put zero thought or effort into this reskinning.) A million and one brown fabrics in my stash and none of them right, so I dyed up some Japanese poplin that was going spare. I’m on the very last pieces of my favourite fabrics for the shirt, both the pale grey and dove grey both which are non-repeatable as I bought up the last of the stock. Appropriate they’re going into this last look then, I guess. 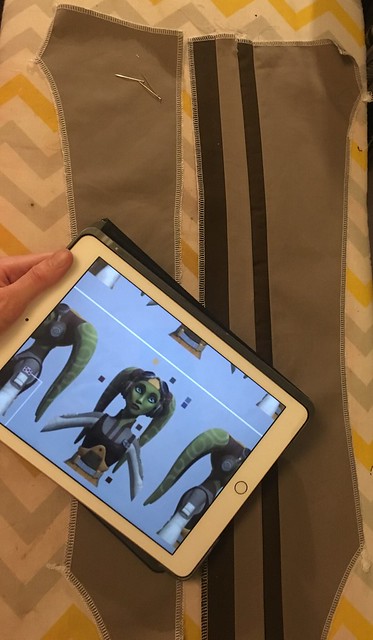 I didn’t exactly both to take any pictures over the weekend, but here’s the captain over the general. These shirts are just not hanger pretty. 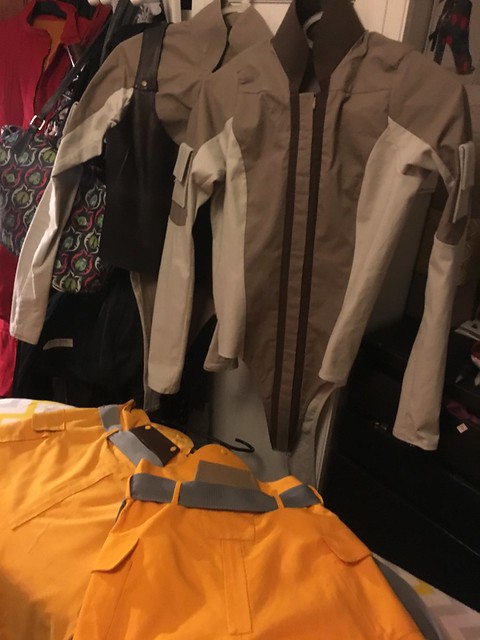 The webbing on the flightsuit is much wider - I prefer the narrower, but the only webbing i have that is the same width is more of a charcoal grey and completely wrong. I’m tryig to do this look entirely out of my hoard rather than buying things, so the wider is fine. the new tab is a cow leather that I have. I think I have a whole hide of it, and I have no idea where it came from. But the colour is perfect. The new false snap fastenings will be covered in the same lamb nappa that I used for the cap.

Oh, i also made a new leather vest, that you can just see in this picture. It’s a darker, more chocolatey brown than what I used previously and that I think is more accurate as well as now differing from the epilogue cap. The old vest will be used for the new headgear. I’ve been wanting to remake it for ages as the original was too short, creeping up about my waistband at the back. I extended the waistline down and generally fitted it better. I added a centre back seam, which i have since noticed on higher def eps. There’s also.. something on either side of the cb seam near the neckline but I cannot make out what it is on the turnaround (way too low res) or in any screen grabs from the show. It’s stressing me out so I’m ignoring it for now since I don’t want to add something wrong, and no one else has picked up on it. I also made the strap greeblie a velcro’d Attachment so I can swap the epilogue and hero doodads out. (Same greeblie, different paint job.) (they could’ve at least tried.)

Gloves and boots are the same, so that leaves the headgear. Again: Exact same, just a slightly different paint job, though i need to make new headgear for my hero look anyway. Joy. Wil get this done when I get it done, but vaguely aiming for the end of the month.
Top

Your attention to detail is amazing! Thank you for posting this, so much to love about it all.
Top
Post Reply
4 posts • Page 1 of 1